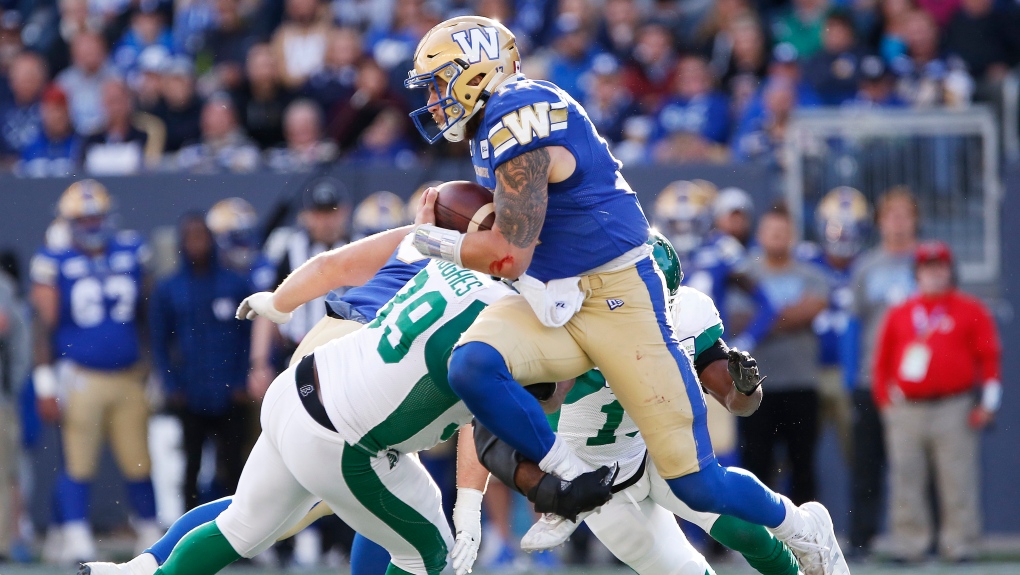 Winnipeg Blue Bombers quarterback Chris Streveler (17) gets set to throw against the Saskatchewan Roughriders during the second half of CFL action in Winnipeg Saturday, September 7, 2019. THE CANADIAN PRESS/John Woods

It was a strange Saturday afternoon in Saskatchewan. Football fans were tuning out of the Banjo Bowl, and tuning into tennis.

When is the last time that happened?

The Banjo Bowl was over after the first Winnipeg drive, and the Roughriders were sent home royally embarrassed following a 35-10 drubbing at the hands of the Blue Bombers.

In the games that the Riders have played Western opponents other than B.C., they are 1-2 and have been outscored 89-39.

It really looks now like the Bombers and Stampeders will fight it out for first in the CFL West, while the Riders and Eskimos battle for third.

Keep in mind, prior to the start of this season, we’d all have taken 7-4 at this point of the campaign.

Minus the last three minutes of the Labour Day Classic, the Banjo Bowl was simply an extension of the Classic’s second half.

The Rider run blocking was atrocious in Winnipeg, so the team just gave up early on the whole idea. Running back William Powell had one yard rushing on four attempts, good for a sparkling per carry average of .25.

Don’t blame Powell, he was running into blue walls!

No running puts all the pressure on the passing attack, and as I’ve said before, there is little explosion in the Rider receiving corps, so the Bomber secondary could simply move up and smother the nickel and diming.

KD Cannon, where are you?

The Roughriders would not be 7-4 without Cody Fajardo. Period.

Having said that, for me, Fajardo’s only real weakness is his long bomb. Cody doesn’t get rid of the long ball fast enough. As a result, receivers are being forced to break stride - coming back to fight for 50/50 balls. Cody got lucky on some 50/50 balls earlier in his starts, but that luck is starting to wear out — 50/50 balls are just that, and often result in picks.

If Cody released the long ball a second or two earlier, it would allow the receiver to run under it, without breaking stride. That’s how you score touchdowns. Long balls often have to be thrown into a space.

Cody has a strong arm, but it’s not a rocket arm like some others have.

To the defensive side of the ball, when Rider GM Jeremy O’Day made tackle Micah Johnson the highest paid defender in the CFL last February, the whole idea was to shore up the middle, both for run support, and to push up into the pocket.

It was a good idea, as that middle area is where games are often won or lost.

Johnson hasn’t been able to do it, and is missing tackles. He needs help, and he’s not getting it. AC Leonard was injured early in Winnipeg, and that didn’t help either.

You can’t blame O’Day. How could he have projected Johnson’s decline? It’s not for lack of trying, Micah is going full out.

Now for the ridiculously obvious. The Rider defence is not the same without Willie Jefferson.

The only Rider defender who can sack the QB with any consistency is Charleston Hughes. Come playoff time, that is a simple fix for an opponent. Block Hughes, problem solved.

To win in the playoffs, you have to have the ability to sack the quarterback without blitzing.

We can only hope that the honest Cody Fajardo was right when he said, Banjo post game, that the Riders were not ready to play. If they were ready to play, the problems are even worse!

There were two hilites at the Banjo. The first hilite was the brief play of backup quarterback Isaac Harker. Although the Bomber defense had long since called off the dogs, Harker showed a quick release with accuracy. Harker was 4/6, good for 54 yards.

The second hilite was that the tennis match was outstanding!

The Roughriders have a stiff test against Montreal this Saturday. A few personnel tweaks are obviously in order; this green bunch needs more speed and more muscle.

Maybe even a bit of youthful enthusiasm.

Without improvement in those two areas, this Rider club might make a quick one-game exit out of the playoffs.