Hewitt Commentary: Zach is back in Regina for West Final 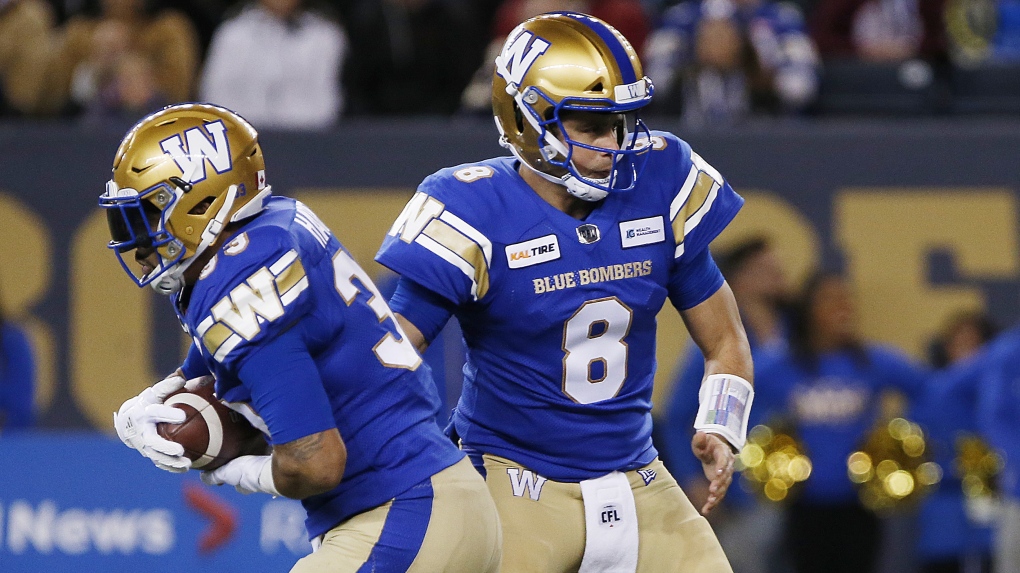 REGINA -- Throughout training camp and the pre-season, Saskatchewan fans hoped quarterback Zach Collaros would play in the Western Final at Mosaic Stadium.

That hope has come perfectly true.

The helmet is a different colour.

As Odell Willis of the BC Lions tweeted Sunday night: only in the CFL.

For the first time since 1972, the Saskatchewan Roughriders will play the Winnipeg Blue Bombers in the CFL’s West Final.

The Bombers improbable 35-14 shellacking of the Stampeders in Sunday’s Western Semi-final, right in McMahon Stadium, sends the blue and gold forward to Mosaic.

Calgary was gunning for their 8th straight Western Final, but fell well short.

After trailing 14-8 at the half, Winnipeg scored 20 points in the third quarter and never looked back.

In that third, Stamp star pivot Bo Levi Mitchell did not have one single, solitary completion.

Winnipeg quarterback Collaros split duties with Chris Streveler, and with a completely different skill set, the duo became a poisonous two-headed snake for the Stampeder defense.

Now that two-headed snake is coming to Saskatchewan.

Sunday’s West Final will be very physical with the contest likely taken by the club who can win the battle of the trenches.

The Blue Bombers have the best run defense in the CFL, giving up only 64.2 yards per tilt in the regular season.

That’s why Cody Fajardo’s health will be of utmost importance.

The Rider quarterback will not be 100 per cent in the West Final as he battles an oblique muscle injury.

Regardless, Cody will have to have some success passing in order to open up the run against that stout Bomber defensive front.

Will he be able to pass?

In Saskatchewan, that is the million dollar question.

Prior to the semi-final, former Rider star quarterback Darian Durant told CKRM Radio’s Michael Ball that he once suffered a similar injury to Cody’s in 2008. Durant felt the doctors could help ease some of Cody’s pain come game time, but it’s the velocity at question.

Darian said that in cold weather, a quarterback has to throw with more velocity, something Mitchell couldn’t do in the semi-final.

So Cody has to be able to put some juice into the pig skin come Sunday.

So far he has thrown a wiffle ball.

So many questions, too few answers right now for the Roughriders and Rider Nation.

Right now, I think the Roughriders are the underdogs for the 2019 CFL Western Final.