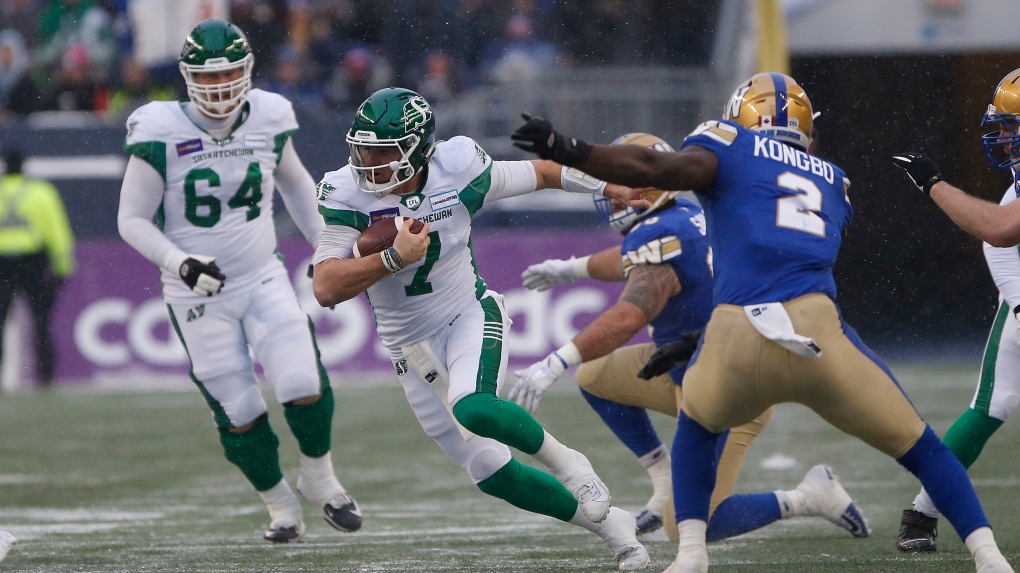 Saskatchewan Roughriders starting quarterback Cody Fajardo is feeling optimistic about the upcoming season as the team readies for training camp and Regina prepares to host the Grey Cup.

Fajardo will be in his third season as the starting quarterback for the Riders in 2022. He led the team to the Western Final in 2019 and 2021 where they lost to Winnipeg on both occasions.

The Riders and their quarterback will look to redeem themselves this year.

“Obviously Winnipeg is the team to beat because they are back-to-back defending Grey Cup champions and without a doubt they’re going to be number one going in. But there’s a lot of optimism around this football team. I think we’re really excited and we’re going to hit the ground running,” said Fajardo.

CFL training camps open Sunday, May 15 and teams must reduce rosters to 75 players by May 17.

Fajardo is excited to have a “normal feel” this year after the 2021 season saw a shortened training camp where teams were forced to place players in bubbles based on position.

“I’m super excited to just to get a training camp and compete against these amazing players and see what this team is and really have that team camaraderie feel that we didn’t get back in 2021 because of COVID,” said Fajardo.

“I think there’s a lot of excitement around our receivers.”

The starting quarterback has spent his offseason working on consistency with the ball and looks to show off his hard work at training camp.

“I think when I show up to training camp, it always feels great. Everybody’s arm feels great. Then you start throwing more, you start taking some hits, and by the end of the season, you don’t have that consistency in your deep ball,” Fajardo said.

“I focused my off-season training on having that consistency and allowing myself to create more energy.”

This will be a season like no other for Fajardo. Not only will Saskatchewan play host to the Grey Cup, but the quarterback is expecting his first child due mid-season, something he said is his motivation to make it to that final game on home soil.

“My main motivation for this year is getting my little guy a picture sitting in the Grey Cup,” Fajardo said.

The Roughriders will begin their quest to become Grey Cup champions when they take on the Winnipeg Blue Bombers on May 23 at home in week 1 of the preseason.

Ukrainian troops pushed forward Monday with their offensive that has embarrassed Moscow, with Kyiv officials and foreign observers hinting at new gains in the strategic southern region of Kherson that the Kremlin wants to annex.

The big day is here: Quebecers head to the polls

Quebecers are casting their votes Monday after a five-week election campaign.

'The time is now': Doctors ask Canadians how to reform primary care

A family doctor and other researchers are asking Canadians to share their experiences with the country's primary health-care system and what they want from it, as a way to help guide future reform.

The federal government has begun its search for an organization to administer an endowment fund aimed at bolstering the economic and social well-being of Black Canadians.

Sacheen Littlefeather, who declined Oscar on Brando's behalf, dies at 75

Native American actress and activist Sacheen Littlefeather, who declined the best actor award on behalf of Marlon Brando during an Oscars protest in 1973, has died aged 75, the motion picture Academy said on Monday.

Indonesian police said they were investigating over a dozen officers responsible for firing tear gas that set off a crush that killed 125 people at a soccer match, as families and friends grieved Monday for the victims that included 17 children.

Nobel win for Swede who unlocked secrets of Neanderthal DNA

Swedish scientist Svante Paabo won the Nobel Prize in medicine Monday for his discoveries on human evolution that provided key insights into our immune system and what makes us unique compared with our extinct cousins, the award's panel said.

Hurricane Orlene is poised to strike Mexico Monday, bringing heavy rain and the potential for severe flooding to popular resort areas along the west coast.