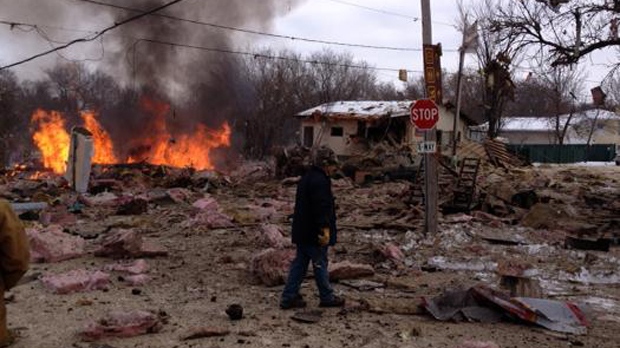 A fire burns at the scene of a house explosion in Regina Beach on Wednesday, Dec. 3, 2014.

Emergency responders are at the scene of a house explosion in Regina Beach.

RCMP say they received a report of a possible explosion in the 200 block of First Street shortly before 2:30 p.m. Wednesday.

Regina Beach Mayor Cameron Hart told CTV News that a fire was still burning after the blast, which blew the house apart and damaged nearby buildings, including a post office.

“I’m sure it’s a gas leak, nothing else would blow like that,” Hart said. “The blast was felt way out on the ice on the lake. It was felt, basically, all over town.”

Hart said no one was injured and nobody was inside the home at the time. Police have set up a perimeter around the scene to keep people back.

The Town of Regina Beach tweeted that a check-in centre has been set up in the gym of South Shore School for residents living in the area of Fifth Street East to Third Street West and Fifth Avenue North to the lake.

STARS says two air ambulances were dispatched to the scene, but both were called back after it was determined that they weren't needed.

A spokesperson for SaskEnergy said it's too early to tell whether a natural gas leak caused the explosion.

Regina Beach is located about 50 kilometres north of Regina along Last Mountain Lake.