How the COVID-19 pandemic, treats and bacon helped a stray dog in Moose Jaw find a fur-ever home

MOOSE JAW -- The Moose Jaw Humane Society says the COVID-19 pandemic has helped a stray dog initially frightened to be anywhere near people overcome its fears and find a home.

The dog was first spotted on the west edge of the city but bolted anytime anyone was spotted coming in sight.

The humane society made repeated efforts to help, but no one was able to get anywhere near close enough.

Later, the dog was seen at Moose Jaw Pallets where a feeding station and insulated kennel was set up to give her a safe place to rest as winter approached.

“With a dog that is that scared, it’s really important to have a safe place for them where they have limited contact with humans but they know there will always be food for them,” said Dana Haukaas, executive director of the Moose Jaw Humane Society.

Many people from the area helped the dog throughout the winter by feeding her table scraps.

Then, the COVID-19 pandemic hit, leaving the humane society short staffed. That’s when Ron and Beth Jelinski, who live across the road from the pallet business, offered to feed the dog for them. The humane society accepted.

“It was the beginning of her happy ending,” Haukaas said.

After that, it wasn’t long before the barriers started to come down as the dog loved to follow Ron on his lawn tractor and would travel back and forth between the pallet place and Ron’s yard, still staying scarce of any people.

As the Jelinskis spent more time at home due to the pandemic, they were able to spend more time around the dog.

“He’d make her supper and put in little bits of leftovers,” Beth said. “He spent more time preparing her meal than he’s ever prepared a meal [at home].”

It wasn’t long before the stray and Ron and Beth’s dog Winston started to bond and play as the stray dog’s trust grew, taking his toys back with her to the pallet business at night.

Ron started to leave treats for the dog on his back door step and she would come every night at the same time to get her treat and was very particular about the time, barking if he was late.

The dog started to trust Ron and Beth after spending more time at their home. Eventually, she started to take treats from Ron’s hand as long as he stayed on his tractor.

With patience and some help from Winston, she eventually took bacon from Ron’s hand when he was sitting on the ground.

Shortly after, the patience and hard work paid off.

“I had to just sit in a lawn chair for an hour and eventually she came over, stuck her head my hand,” Ron said. “It was okay then.” 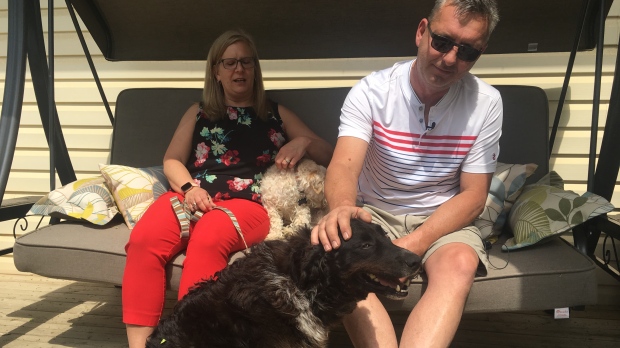 Now, she’s Ron and Beth’s second dog thanks to a pandemic and some patience.

“They had extra time, they were able to build her trust, and that’s the result is they now have a new dog,” Haukaas said. “They didn’t go into it intending to get one, but we are sure grateful that they offered her their home.”

The dog has also been given a name, Boo, because she spent so long scared of everything and everyone and her lightning fast speed.