FORT QU'APPELLE -- The Fort Winter Festival is returning to Fort Qu’Appelle for 2020, featuring a 540 square foot ice palace for families to enjoy.

"We’ve just got our main entrance formed up and ready to go. On the back side we have a kids slide made of ice that we're still kind of forming up," Festival Committee Secretary Kristin Main-Parfitt said.

The Aurora Ice Palace is the main attraction of this year's Fort Winter Festival. The ice palace has walls standing 15 to 20 feet tall. It's the first time organizers have tried it out, and are hoping to add to it next year. Mini Donuts are expected to be set up inside along with an ice throne and some spots for a small fire. There are also plans to bring the cabaret to the palace in coming years. 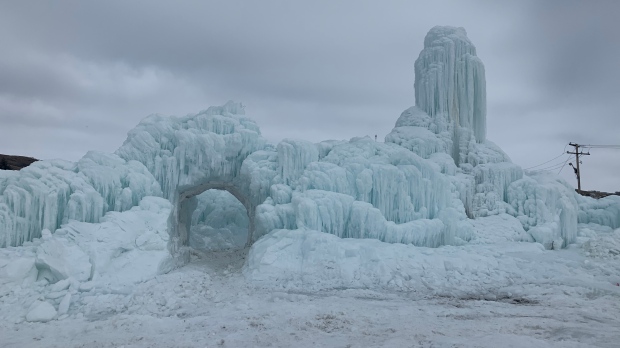 "We’re hooked up to the fire hydrant that the town approved us to use. And then we've hooked that up to a manifold, and we've got 16 extensions off that that feed our sprinkler system. So it's essentially like an irrigation system," Main-Parfitt said.

Organizers say although the warmer weather has made it more difficult for the ice palace to be built, it's not so warm that anything will be cancelled so the festival should be good to go

"(Around) -10 and everything like that is a little too warm for us; -20 is ideal and stuff like that for building, -30 would be perfect actually, because you can still build throughout the day rather than just in the evening," Main-Parfitt said.

Instead, volunteers are doing the majority of work at night.

After taking a year off, the festival is hoping to re-establish itself as a main attraction in the valley. This year’s event includes a wide variety of activities like drifting and ATV racing on the lake, a polar bear dip, a street hockey tournament, uphill drag races, and horse drawn sleigh rides.