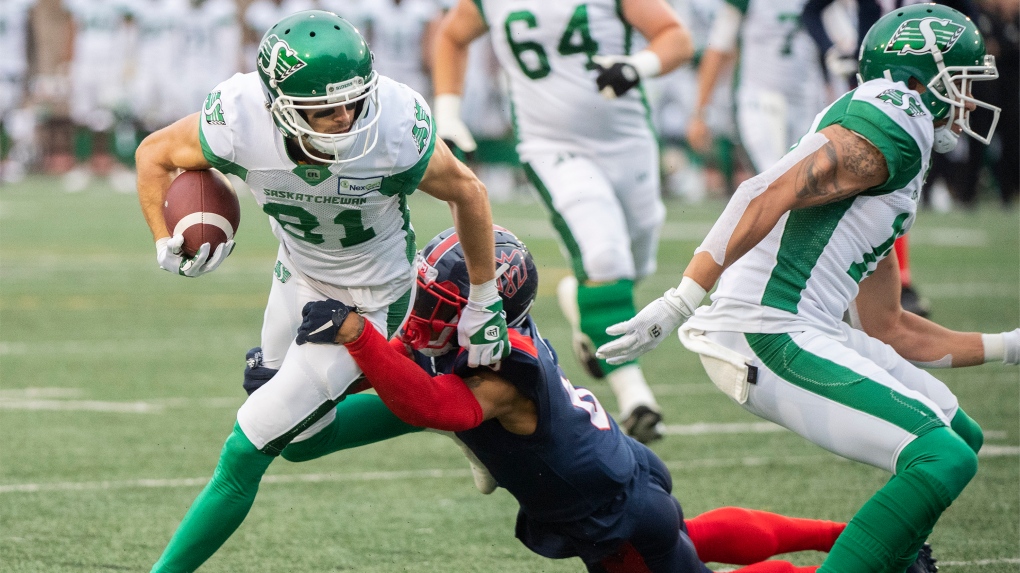 The Saskatchewan Roughriders have 12 players on either the one or six game injured lists and 10 roster players listed as ‘out’ or ‘questionable’ leading into Saturday’s week four rematch versus Montreal.

Head Coach Craig Dickenson still has yet to announce who will start at receiver in place of Shaq Evans after he fractured his foot last week.

“We’re still by committee,” he told reporters Thursday after practice. “But we’ll look at the film today and go from there.”

Practice squad receivers Tevin Jones and Dieuly Aristilde Jr both had reps with the offense this week at practice. However, Dickenson has hinted at changing the team’s nationality ratio to add another Canadian to the starting roster.

He says the CFL’s rules on the number of Canadians being on the field is difficult to navigate, but an aspect of the three-down game he relishes.

“I love it. It’s really neat,” said Dickenson. “I asked Jeremy [O’Day] the other day, ‘what would it be like to dress your best 45 [players] and not have to worry about nationality?’ But the reality is we still feel like we’re dressing our best 45.

“You do have to play with a certain amount of Canadian players which is great. That’s why it’s called the CFL.”

The Riders are expected to release their roster Friday.

Anne Heche on life support, survival of crash 'not expected'

Anne Heche is on life support after suffering a brain injury in a fiery crash a week ago and her survival isn't expected, according to a statement from a representative.

Former U.S. President Donald Trump has called for the 'immediate' release of the federal warrant the FBI used to search his Florida estate, hours after the Justice Department had asked a court to unseal the warrant, with Attorney General Merrick Garland citing the 'substantial public interest in this matter.'

The City of Toronto is investigating a power outage that left a large swath of the downtown core including office buildings, a major mall and a university campus without electricity yesterday.

'Sturgeon moon' in photos: Last supermoon of the year passes over Earth

Rising over beaches, buildings and statues, the last supermoon of the year created ample viewing and photo opportunities around the world Thursday night.