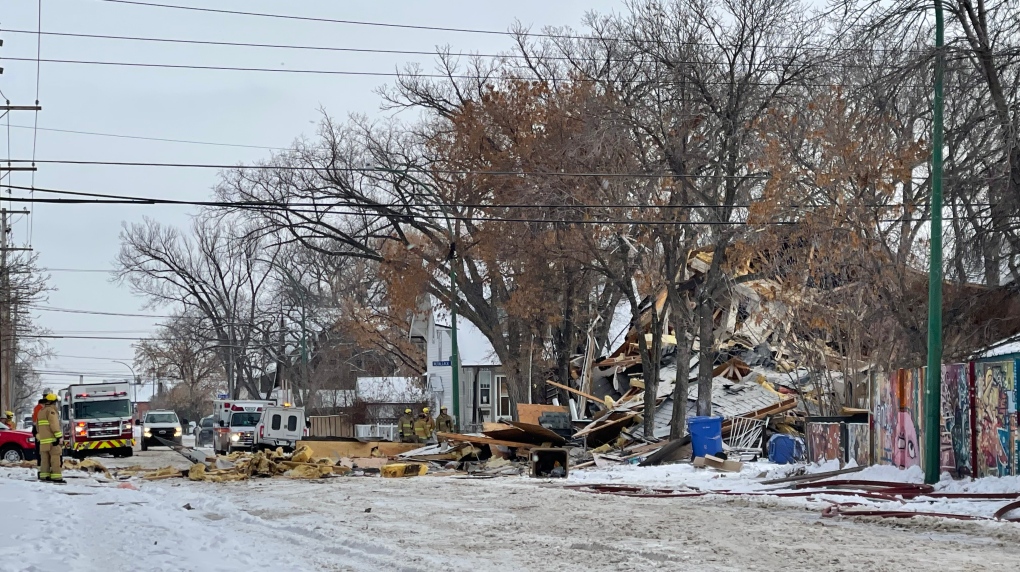 The aftermath of a major explosion in Regina's North Central neighbourhood on Nov. 13, 2022. (Brianne Foley/CTV News)

The Regina Police Service (RPS) is asking the public for information or video that could assist in the investigation into a building explosion in the north central area on Nov. 13.

Around 10:40 a.m., police were called to the area of 6th Avenue and Retallack Street for a report of a building explosion at 1202 Retallack St. Officers blocked off traffic and began to investigate whether the explosion was criminal.

Through investigation, police determined a gas line in the building had been compromised on Nov. 13 sometime between the hours of 5 a.m. and 7 a.m., according to a release from RPS.

Det. Cst. Mark Oliver said police were able to determine the time frame based on the build up of gas pressure. However, he could not say how the gas line was compromised or if it was intentional as the matter is still under investigation.

Although the explosion itself was accidental, RPS said the compromise of the gas line is a criminal act and officers are looking to find out who is responsible for that.

“We can’t really say what the charge is going to be,” Oliver said.

RPS are asking anyone in the area who may have seen suspicious activity or have stored video in a surveillance system to contact them or Crime Stoppers.

“We know that many cameras were destroyed because of the event and most of that (video) is stored in the cloud or on a hard drive, so we’re looking for some evidence that may come forward of any suspicious activity,” Oliver said.

According to police, no serious injuries were reported due to the explosion.

How more than 100 women realized they may have dated, been deceived by the same man

An Ontario man is being accused of changing his name, profession and life story multiple times to potentially more than 100 women online before leaving some out thousands of dollars.

A Strathcona County toddler has been rescued from suspected sexual exploitation, and the child's mother has been charged, police said.

LeBron James is the NBA's new career scoring leader. With a stepback jump shot with 10.9 seconds left in the third quarter against the Oklahoma City Thunder on Tuesday night, James pushed his career total to 38,388 points on Tuesday night and broke the record that Kareem Abdul-Jabbar held for nearly four decades.

U.S. President Joe Biden exhorted Congress Tuesday night to work with him to 'finish the job' of rebuilding the economy and uniting the nation as he delivered a State of the Union address aimed at reassuring a country beset by pessimism and fraught political divisions.

Rescuers raced against time early Wednesday to pull survivors from the rubble before they succumbed to cold weather two days after an earthquake tore through southern Turkiye and war-ravaged northern Syria. The death toll climbed above 7,700 and was expected to rise further.

On list of 50 'most Instagrammable' places, only 1 is in Canada

A new ranking by global travel site Big 7 Travel has revealed the most Instagrammable places for people to visit in 2023, but only one Canadian location, Banff, is among them.

U.S. intelligence officials believe that the recently recovered Chinese spy balloon is part of an extensive surveillance program run by the Chinese military, according to multiple American officials familiar with the intelligence.

From $55 to $130: Which Canadians plan to spend the most this Valentine's Day?

As Valentine's Day approaches, many Canadians are preparing to celebrate by taking their loved ones to dinner and buying them gifts, but how much are we spending on this day coast to coast?