A time capsule created in 1995 by students from a Moose Jaw, Sask. high school was recently discovered 18 years after it was intended to be opened.

The capsule was sealed by students at Riverview Collegiate High School on March 16, 1995, with the intention of it being opened on Dec. 26, 2004.

Deana Kempel, the current principal of Riverview Collegiate, recently found the capsule when she was cleaning out a storage room.

“In a pile of stuff I found this time capsule and I thought ‘they’re way passed the date that they were supposed to be opened, what should I do?’” Kempel said. 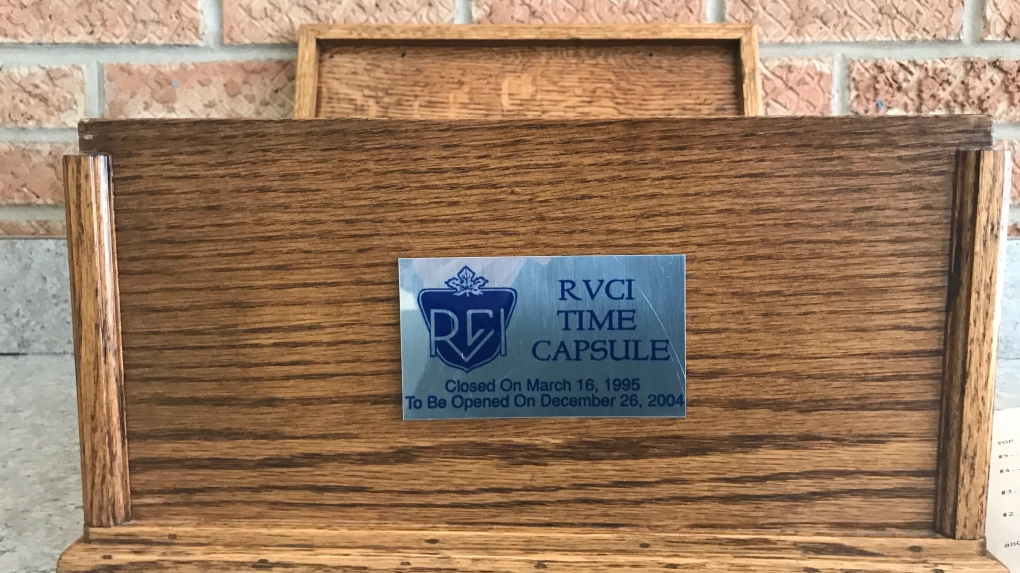 The time capsule was scheduled to be opened on Dec. 26, 2004. (Stefanie Davis/CTV News)

She didn’t feel right opening the screwed-shut box herself, so she posted about it on a Moose Jaw Facebook group.

“Within minutes, I had people messaging me that they would want to come and get it and be responsible for it,” Kempel said.

The time capsule contains entries from students who were in kindergarten, Grades 1 and 2 from different schools, and students from Grades 9 to 12 at Riverview Collegiate in 1995.

Most made predictions for what the following 10 years would bring for them. There were also newspapers, entertainment artifacts, videos and photos in the box.

Angie Sjoberg, who was in Grade 12 at Riverview in 1995, said she had totally forgotten about the time capsule until she received word it had been found a few days ago. Its resurfacing has caused Sjoberg, and many other students and staff, to reconnect with people they hadn’t heard from for years.

“I got in touch with a couple more [people] who were very interested to show their kids that are now in Grades 10 and 12, so it’s kind of neat,” Sjoberg said.

Renee Verge, who was a Riverview Collegiate teacher in 1995, has also reconnected with some colleagues and students over the past few days as they all revisit the time capsule.

“We were a very young staff at the time, a very close staff, we did a lot of things together. We spent a lot of time together coaching and spending time with kids, so that was something that really came to the forefront for me was ‘I have to reconnect with some of these people.’” 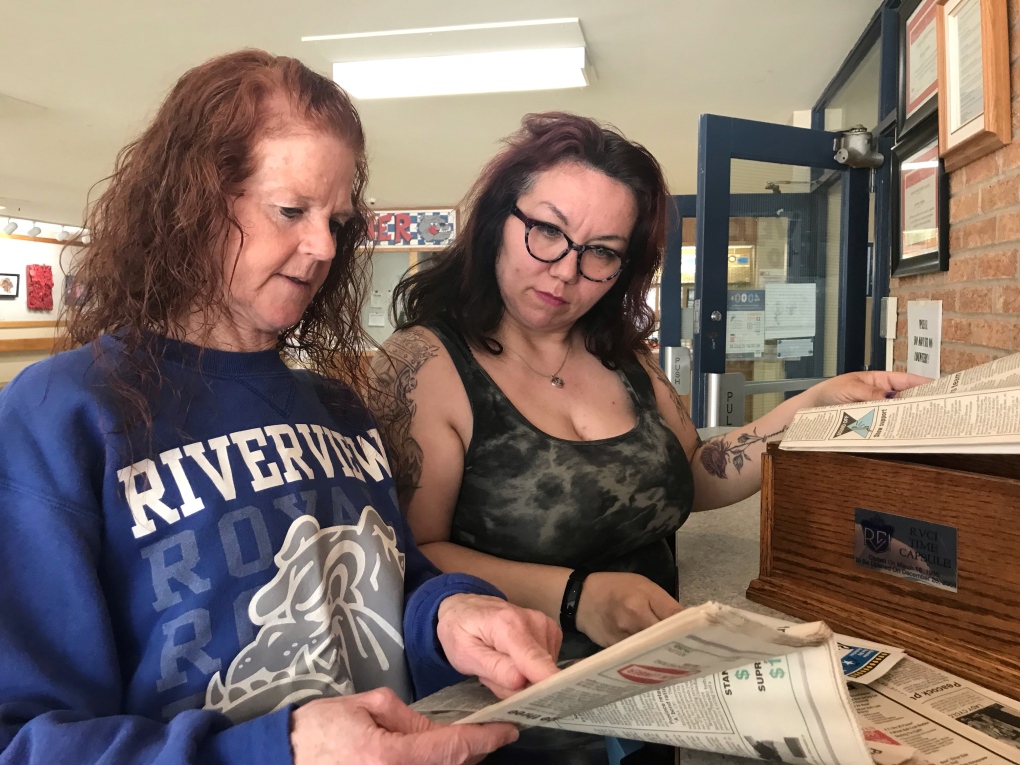 As soon as she heard about the box, Verge said those 27-year-old memories all came flooding back.

They picked Dec. 26, 2004 to reopen it because they figured it was the time when the most students would be back in Moose Jaw visiting for the holidays.

Verge said reopening the box, and her memory, caused many emotions to surface.

“There’s this little flash of these [children] when you were coaching them or teaching them or something, and it reignites your brain about going back a little bit and valuing that time,” Verge said. “I just saw little snippets of kids and teachers and it was very emotional for me.”

Throughout her years of working at Riverview Collegiate, Verge said she’d see the time capsule in the trophy case in the main foyer, but one day it was no longer there.

“I know where it used to be and then over the years it wasn’t there and you kind of forget about it,” Verge said. “I knew that it should have been opened a long time ago, but it just kind of gets in the back of your brain and you kind of leave it there.”

Verge said students and staff met in the gym one evening in March 1995 to put their video or written predictions and memorabilia in the box.

“People just came as a family,” Verge said. “Many of their parents were grads from Riverview and so when we had the gym and the building opened up in the evenings, people would flock here. It was awesome.”

She said it was a “very alive night” in the school.

Students were encouraged to put anything they wanted in their predictions - whether it was their personal goals, things they expected to see around the city or what they would like to see happen at the school over the next decade.

The Temple Gardens Hotel & Spa had just opened in Moose Jaw at the time, so many students referenced its future in their predictions.

Some talked about their favourite teachers or their friends, while others shared hopes of making it as professional athletes or dancers.

“My prediction that I did on the video was in there and it actually was correct,” Sjoberg said. “I was married with two kids by 2004.”

Scott Schultz, a retired Saskatchewan Roughrider defensive tackle, was another high school student who contributed to the time capsule.

His prediction was not so accurate - which benefitted him in the long run.

He predicted that Canada, and specifically Moose Jaw, would join the NFL and the CFL would no longer be running.

MemoryKPR, a local company that digitizes photos and videos, heard about the time capsule and wanted to get involved.

“There were five types of media in the time capsule,” Jessica McNaughton, one of the founders of Memory Keeper, said. “We digitized it into a MemoryKPR which is what we do.”

Now, they can share all of the box’s contents with anyone who contributed to it online.

There is a password protecting the project, which time capsule contributors can get by reaching out to the school, MemoryKPR or alumni volunteers who are leading the project.

“We’re still just getting it out there. There’s still lots of people who probably haven’t seen it yet who are in the videos, but from the ones we’ve seen so far, we’ve heard so many great stories about people,” McNaughton said. “There’s some nice kinship that’s coming together as a result of it.” 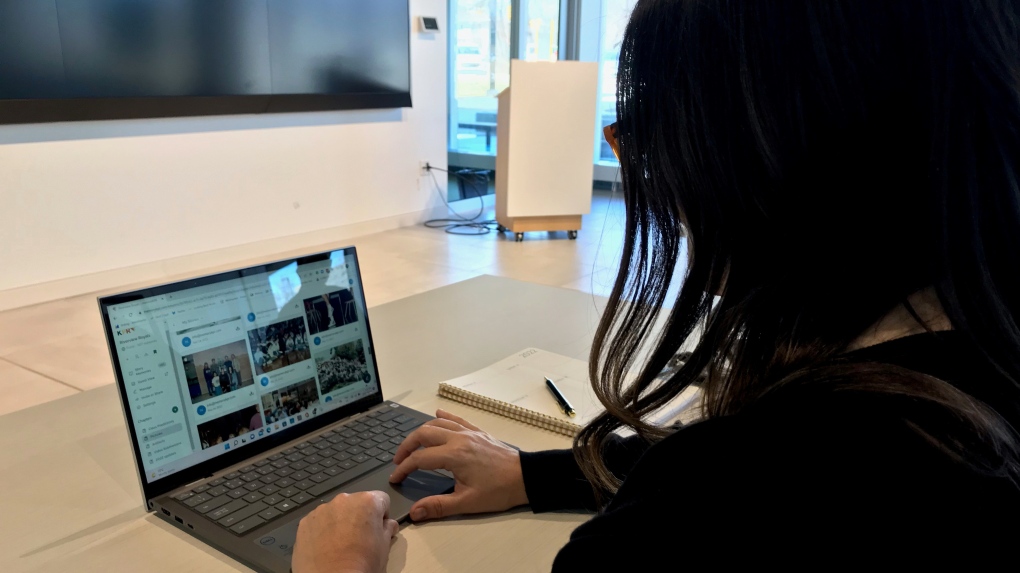 Members of the school’s community said digitizing it has been the perfect step in getting everyone reconnected.

“When I heard MemoryKpr offered to get it digitized to people can see it and share it, I thought ‘this is exactly what a Time Capsule should be used for in the year 2022,’” Verge said. “The value of digitizing it is that you can go back [through it] at your own pace.”

Verge said part of her is glad the capsule was forgotten about so they can have these special moments now - 27 years later.

“I think there is more value the longer it goes on, especially thought the pandemic,” Verge said. “It’s put value on the past and finding a way to keep the past in front of you - whether it be in pictures or videos.”

The Alberta legislature has passed Premier Danielle Smith’s controversial sovereignty act but not before first stripping out the provision that granted Smith’s cabinet the power to bypass the legislature and rewrite laws as it saw fit.

Russia freed WNBA star Brittney Griner on Thursday in a dramatic prisoner exchange, as the U.S. released notorious Russian arms dealer Viktor Bout but failed to win freedom for a Canadian-born U.S. citizen, Paul Whelan, who has been jailed for nearly four years.

First Nations leaders in Manitoba are calling for the resignation of Winnipeg's police chief after the force decided to not search a landfill for the remains of two Indigenous women.

Legendary Canadian singer Celine Dion says she suffering from Moersch-Woltman syndrome, a rare neurological disease causing muscle spasms. As a result, the Quebec-born vocalist announced she will not resume her world tour in Europe next February.

Canadian singer Celine Dion was diagnosed with stiff person syndrome, a rare neurological condition with no cure, forcing her to take a step away from her world tour.

Honey and Barry Sherman's daughter is speaking out ahead of the five-year anniversary of her parents' unsolved murders, imploring anyone with information to help solve the killings.

A Quebec judge has authorized a class-action lawsuit against the maker of the popular online video game, Fortnite, after parents of three children who played it argued it was too 'addictive.'