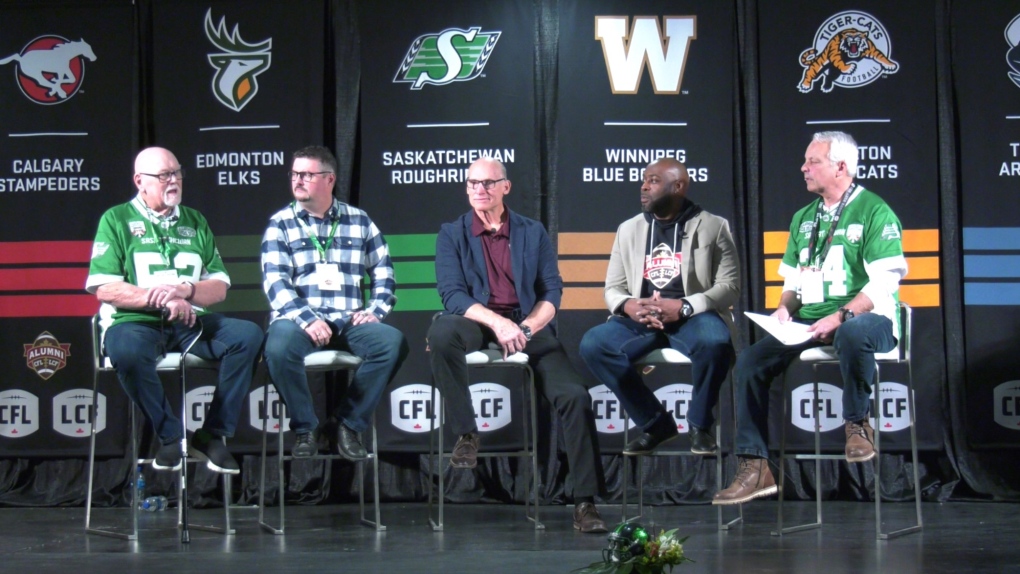 Fans young and old met with the stars of the past at the CFL Alumni Association’s (CFLAA) Legend Luncheon on Friday.

The event is a Grey Cup Festival staple, giving fans the opportunity to keep the league’s deep traditions and long history alive.

“It’s an opportunity to bring alumni together, help them connect with the fans during Grey Cup week and celebrate the league,” said Greg Fieger, the 2022 event co-chair and former Roughrider.

Rider fan Cindy Schneider has been to 18 of the last 19 Grey Cup festivals including this year’s. She makes sure to take in the luncheon every year.

“Just to have the closeness to the players that we know, the one’s we don’t know, we introduce ourselves,” she said. “It’s just a fabulous event.”

“Everything the CFL does well, we should cherish and celebrate,” he said. “The access to players, the family aspect, the rules, the bringing of people together from across the country. We may have different colours on but the same love for the same league. That’s what we love about it.”

Fieger said there’s value in the connection to the fans for the alums as well.

“Alumni love having conversations with fans,” he said. “Sometimes fans are a little shy about saying, ‘Hi’ or asking for an autograph.”

“To all the fans, please ask. They are more than flattered to have that conversation.”

The lunch also serves as a way for the CFLAA to raise funds so they can support former players through any life situation.

“Whether it’s health-related issues or etcetera, there’s an opportunity to build this fund to support alumni,” said Fieger.

Another former Rider was celebrated at the event Friday.

Legendary running back George Reed received a standing ovation as one of the greatest CFL alumns and for his contributions to the community and league.

Alums from different eras of CFL football praised Reed for his impacts on the game.