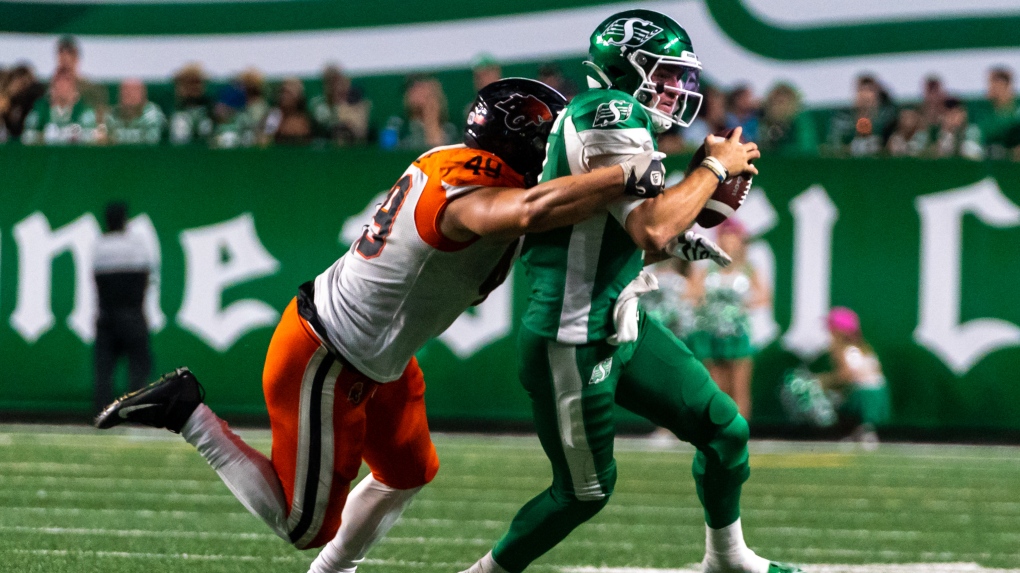 The B.C. Lions are off to their best start in 15 years after a 32-17 victory over the Saskatchewan Roughriders on Friday night at Mosaic Stadium.

Nathan Rourke and the Lions scored 28 unanswered points to close out the contest. The Riders have now lost three in a row as they head into the bye week with a 4-4 record.

The Riders offence looked potent in the first half scoring 17 points, one of their best offensive starts of the season. Cody Fajardo, making his return to action after sitting out last week with COVID-19 and resting an injured knee, completed 18 of his 27 pass attempts for 168 yards, one touchdown and an interception. He averaged 6.2 yards per attempt. Fajardo was sacked four times including three times on one drive in the third quarter.

The Riders scored the game’s first touchdown in the first quarter after Charleston Hughes forced a fumble deep in B.C. territory. The turnover led to a 14 yard touchdown pass from Fajardo to Tevin Jones and a 10-1 lead.

In the second quarter, Fajardo engineered a seven play, 80 yard drive that included a 28 yard dash by Jamal Morrow that would have been a sure touchdown if not for a shoe-string tackle by B.C. defender Quincy Mauger. Duke Williams brought the ball down to the one yard line on a 16-yard catch. Fajardo completed the drive by plunging himself into the end zone. The Riders led 17-14 at the half after a one yard B.C. rushing touchdown from Rourke.

Langenberg’s Jess Moskaluke thrilled the crowd at half time on Country Night at Mosaic Stadium. She capped off her performance with her hit song “Cheap Wine and Cigarettes.”

The Lions made some major adjustments in the second half. With 6:48 to go in the third quarter, Rourke led a touchdown drive that culminated in a Dominque Rhymes 14-yard touchdown and the Lions’ first lead of the game. From there, the visitors holding a 24-17 lead, never looked back. Rourke continued scoring points in the fourth. The 24-year old lobbed a ball between the goal posts, off his back foot, to Jevon Cottoy to put the Lions up 31-17.

Fajardo, trying to get his team back in the ball game, was forced out of the pocket with 3:41 to play and launched a deep pass that landed in the waiting hands of former Rider Loucheiz Purifoy. He returned the ball 50 yards halting the Riders’ attack.

The Saskatchewan Roughriders now enter their bye week with a 4-4 record. They’re back in action on Saturday, August 13th when they visit the Edmonton Elks.