Eight female filmmakers from Saskatchewan gathered in Regina to celebrate and honour the life of their peer, Trudy Stewart.

The event was an opportunity for the filmmakers to pay tribute to Stewart, but also showcase their work to a willing audience.

Stewart passed away suddenly in September 2019. She was just 46-year-old and is survived by her son and daughter. 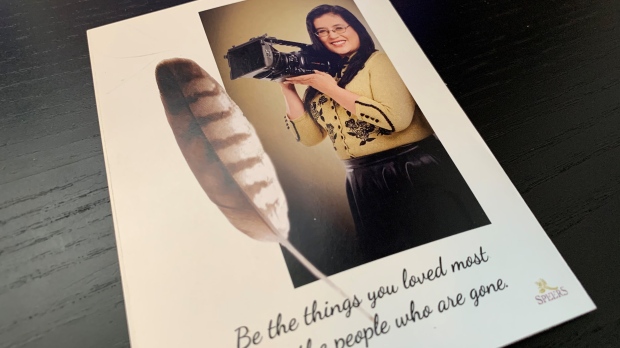 “I think Trudy has affected all of us in some form of way,” filmmaker Candy Fox said. "She helped me a lot, she supported me all the time and it’s a beautiful way to honour her and also to bring indigenous films made by women or just films made by women to the community, I think we need to see more of that."

Stewart was schedule to be one of the presenters at the event on Thursday. The Saskatchewan Filmpool Cooperative continued on with the event and named it, "Remembering the Past -- Looking to the Future" in Stewart’s honour.

"She was amazing and I’m so happy we can honour her in this way," Fox said.

Stewart's close friend, Janine Windolph, presented her new film, "Stories Are in Our Bones". It's a story about taking her city-raised sons on a fishing trip with their grandmother in La Ronge, to rebuild their connection to their home land. Thursday’s screening was the first public Canadian viewing of the film with the National Film Board.

"Our first screening was in San Francisco at the American Indian Film Festival, so we're excited to be able to share it here in Regina," Windolph said. "It was also part of me trying to reconnect them with their culture and their northern roots and to know who little Janine was and I felt that being in the city, it disconnects them from knowing who I was as a child."

The night was emotional for the filmmakers, but they say they will continue their work in the community while keeping Stewart close to their heart.