Looking back at 2022: Yorkton's Broadway gets a new, reconciliation-led look

Looking back at 2022: Yorkton's Broadway gets a new, reconciliation-led look

Yorkton’s Broadway Street was handed a face-lift in late September, saying goodbye to a long-time landmark in the Sundial.

Instead, now in its place, is a brand-new structure — a 37’ tall tipi, a nod to the city’s work in reconciliation.

From Wednesday to Friday, CTV News is highlighting three of Yorkton’s top stories of 2022, as chosen by members of the CTV Yorkton newsroom.

The day the tipi was unveiled and celebrated to the public, it was emotional to many in the crowds, along with those who had their fingerprints on the structure.

“The tipi, for me, is a symbol of family, love and community,” said Yorkton Mayor Mitch Hippsley during the unveiling, holding back tears.

“I’m just so proud to be able to do this. For my ancestors, for everyone,” said Yorkton Tribal Chief Isabel O’Soup.

“At one time, we were not allowed to practice our language, culture and traditions. This is just a barrier-breaking moment for me — I love it.”

Yorkton Tribal Council (YTC) made the project happen, spending roughly $190,000 on the tipi and related costs. The City of Yorkton paid up to $10,000 for a new concrete slab for the old Sundial to sit on — now located just a quick jaunt to the east at the Yorkton Brick Flour Mill Site. 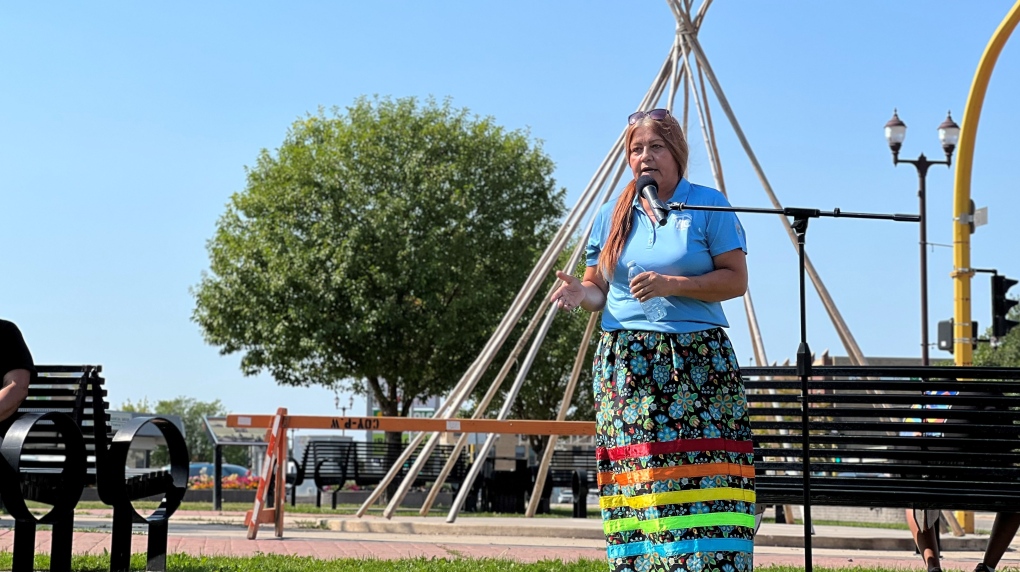 A ceremony held on Thursday by Yorkton Triabl Council focused on blessing the land where the tipi will be erected. (Brady Lang / CTV News)

At City Centre Park, where the tipi now stands, the barrier-breaking unveiling included a lot more than just a ribbon-cutting.

There, YTC presented gifts to many in attendance, to those who walked with them during the tipi’s construction and YTC’s growing footprint across Yorkton and area. It also featured a moment of unity, where multiple members of the community came to stand around the tipi, each holding a different pole, while YTC’s Cory Cadotte explained the various tipi teachings.

The project was pushed trough council quickly, to ensure the tipi’s raising by the National Day for Truth and Reconciliation, which was met by a day.

The original idea for the tipi in City Centre Park came from Tribal Chief O’Soup, but it was an unnamed City Councillor who mentioned the need for additional Indigenous representation, such as a tipi, to be erected in the park.

“I said, ‘This is wrong, there’s no First Nations content,’” recalled Yorkton Tribal Chief Isabel O’Soup during the ground blessing event on Sept. 1.

Now, 364 days later and Yorkton looks a lot different when driving through Broadway.

At one point in the summer, four tipis were on display throughout the city — at City Centre Park, at the Tourism Yorkton Offices, at Dr. Brass School and at the Painted Hand Casino.

For Hippsley, who was proud of what the city and YTC had accomplished, he called it a “profound time” in the history of Yorkton.

“Truth and Reconciliation has finally surfaced and this [the tipi raising at City Centre Park] is an act to prove we want to move forward together,” he said during the ground blessing event.

“There wasn’t enough representation with our Indigenous communities.”

O’Soup’s emotions ran high during the initial event, thinking towards the future while also remembering the past.

“So they can go forward, not having to be ashamed of being a First Nation.”