At a small ceremony in Wascana Park, three separate couples committed to being together forever.

The outdoor wedding took place on Sunday afternoon and was open to couples of all orientations who were either getting married for the first time or who wanted to renew their original wedding vows.

Terry Van Mackelberg, also known as drag queen Flo Mingo, is a marriage commissioner. He announced his plan to host the multi-couple wedding a few weeks ago as one way to celebrate Pride month. Flo Mingo officiated the wedding.

“I’ve always wanted to do a group wedding and June is a month of love and celebration, especially for the LGBTQ2S+ community, to show where we were and how far we’ve come,” he said. “What better way to show love and acceptance than having a group of people celebrating that.”

Pride month was not celebrated in its normal fashion again this year because of the COVID-19 pandemic. Van Mackelberg said while the month is largely about celebration, it’s also still about the movement towards equal rights.

“A way to push that movement forward is visibility. When you’re out in a park with straight couples, gay couples, lesbian couples – it doesn’t matter who you love, love is love, so I think the visibility piece was very important,” he said.

As word about the wedding spread, several local businesses and organizations stepped in to help make the day extra special with cakes for each couple, travel vouchers and more.

‘A VERY MEMORABLE WAY OF GETTING MARRIED’

Sunday’s ceremony included one couple that was getting married and two couples renewing vows. Each couple had a small group of family and friends there to watch.

Jordy Ironstar and Leslie Norton said “I do” for the first time. They have been a couple for 10 years and have been engaged for five.

They said because they are a gay couple and because of Ironstar’s Indigenous upbringing, they have been looking for a way to get married that was not religious.

“It was kind of hard to picture how our wedding was going to look when it’s kind of seen as more of a traditional thing,” Ironstar said. “This is a very memorable way of getting married and this way we kind of just show up and it’s done.”

The couple said they have been living as though they are married for years, so this is just the next check off their checklist of things to do together.

Ironstar said he hopes younger people, regardless of their sexual orientation, will see the group wedding as a reminder that it’s important to have love in life.

“Love comes in very different forms and love means different things to different people, so I think if you live your life authentically you will attract people to you just by being yourself,” Ironstar said.

They said the success of their relationship so far has come from truly accepting each other, having their families accept each other and from going with the flow.

“Find a best friend and marry them,” Norton said.

Jean Hillabold and Mirtha Rivera renewed their vows on Sunday. They’ve been together for 31 years and have been married for 11 years. 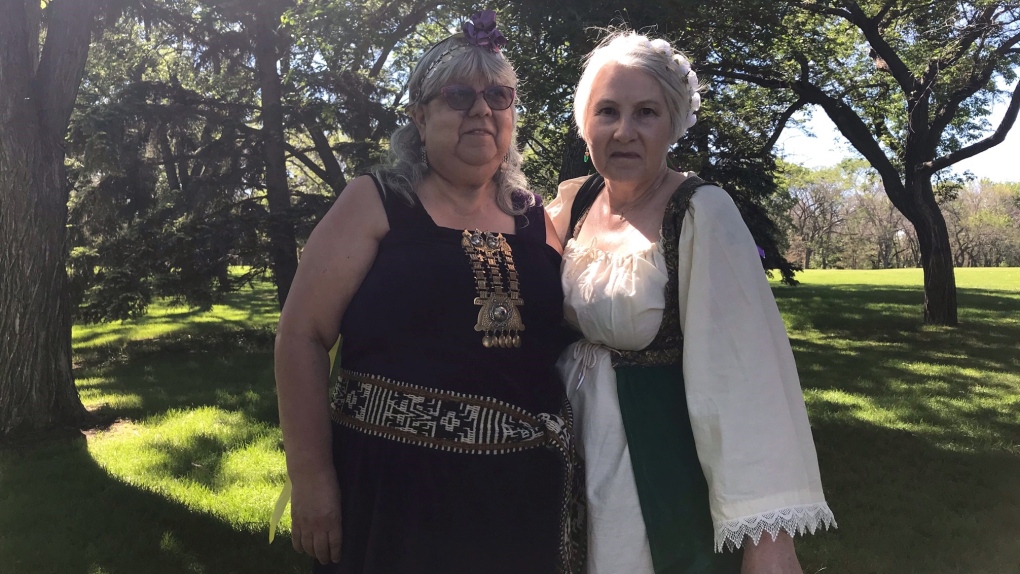 When they met all those years ago, Rivera was married to a man and had two children.

“I thought I need to keep hands off,” Hillabold said. “I thought she was very attractive but I thought ‘no, she’s very catholic, she’s married, hands off!’”

Rivera repeatedly told Hillabold to call her. Eventually she did and they’ve been together ever since.

The couple wanted to renew their vows on the tenth anniversary of the wedding, but because of the COVID-19 pandemic, they weren’t able to.

They said “I do again” in the same dresses they wore at their original wedding 11 years ago. They said socially, there is a big difference between when they first met and now.

“Thirty-one years ago you wouldn’t have heard of anything like [this wedding] happening. We couldn’t even be on the street holding hands,” Rivera said. “We couldn’t be perceived as a lesbian couple because of the repercussions and retaliation, which was present in many of our friends.”

They both said although there is still progress to be made, they’re pleased about how far society has come since their romance first started.

“I’m happy that all people can be who they are and love who they want,” Rivera said. “There’s still hateful people, but love is love.”

THE FIRST OF MANY

This was the first multi-couple wedding Van Mackelberg officiated, but he hopes it’s a new pride month tradition in the city.

“This was kind of last minute planning and getting it all together,” he said. “Next year I think it would definitely be an amazing event with a couple of months notice and I would love to have 50 couples out here.”

Flo Mingo would officiate again, which Van Mackelberg said was a true honour.

“I became a marriage commissioner in order to allow everybody to celebrate love,” he said. “For them to have me as a part of their day – that’s a magical moment for them and I’m just glad I could share it.”