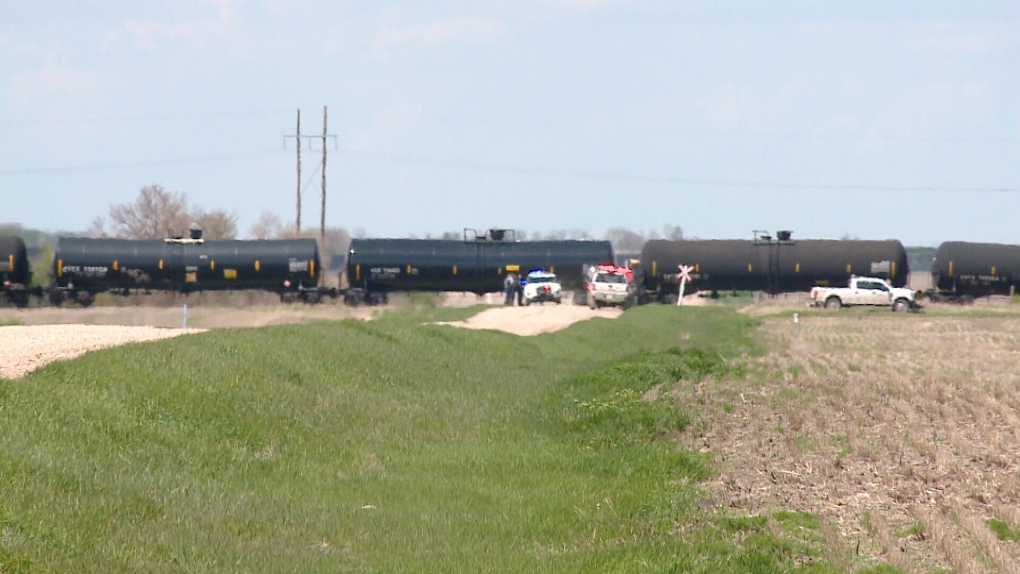 RCMP say a man is dead after a crash near Edgeley, Sask. connected to a train derailment on May 26, 2022. (Katy Syrota/CTV News Regina)

A 57-year-old man from the R.M. of Lajord is dead after the road maintenance vehicle he was driving collided with a train on Thursday afternoon.

It happened about three kilometres west of Edgeley, Sask. at a level crossing around 12 p.m. Thursday on the 2154 grid road, one kilometre north of Highway 364.

According to police, the truck was driving southbound and was hit by the eastbound train at a level crossing. The man was declared dead at the scene. No other injuries were reported to police.

The man's family has been notified and Victim Services have been made available.

CN Police remained on scene Thursday evening and will continue the investigation.

Edgeley, Sask. is about 53 kilometres northeast of Regina.

Tamara Lich, one of the organizers of the Freedom Convoy, has been arrested in Alberta for alleged breach of bail conditions, CTV News has learned.

Canadians on TikTok open their doors to Americans seeking abortions

With the overturning of Roe v. Wade opening the door to abortion bans in the U.S., Canadian Tiktokers are welcoming Americans who are considering travelling north of the border to get an abortion.

An Ontario community is reeling after a 23-month-old boy died when he was accidentally left in a hot car outside the school where his mother taught, the mayor says.

A 101-year-old man was convicted in Germany of 3,518 counts of accessory to murder on Tuesday for serving at the Nazis' Sachsenhausen concentration camp during the Second World War.

Prime Minister Justin Trudeau announced more money for Ukraine -- including a $200-million loan through the International Monetary Fund -- at the end of the Group of Seven leaders' summit in Germany.

OPINION | Is saving money worth it with inflation at a 40-year high?

With inflation reaching a 40-year high, many Canadians have been left in a state of worry. Not only about the rising prices of consumer goods, but whether or not they should continue to save money. It’s not such a simple question, and it depends greatly on your circumstances, contributor Christopher Liew explains in an exclusive column for CTVNews.ca.

Ontario Premier Doug Ford defended his decision Monday to name his nephew minister of citizenship and multiculturalism, saying the newly elected legislator has spent years representing one of the most diverse communities in the province.

The Montreal police's anti-gang squad has seized 'a significant quantity' of weapons and drugs in a joint-department operation running from Toronto to Quebec.