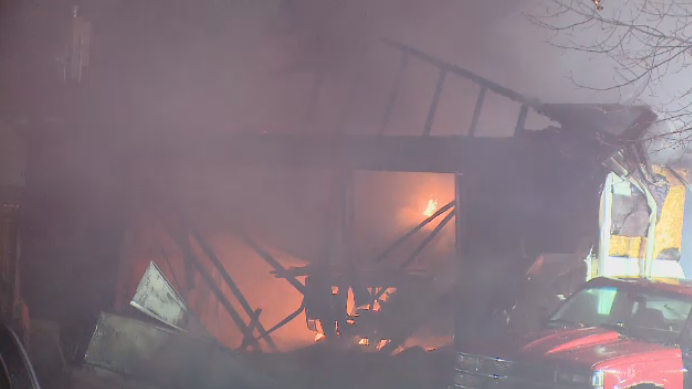 Crews responding to a garage explosion in Regina that left one man dead.

REGINA -- A man is dead after an explosion and fire at a garage in the 4400 block of 7 Ave. on Friday night, according to the Regina Fire Department.

Fire crews arrived on the scene after multiple 911 calls around 10:40 p.m., and found a “substantial fire” in the detached garage of the home. An injured man was found lying in the alley.

The man in his mid-twenties was taken to hospital in critical condition. He died from his injuries on Saturday morning. Regina Fire Marshall Randy Ryba described the man’s injuries as “very severe burns.”

This is the first fire resulting in a death this year.

“This is the first one we’ve had in about a year and a half,” said Ryba. “But it’s a very sad day for our citizens and his family for sure.”

One other person inside the home was safely evacuated.

While crews battled the blaze, a “major” explosion occurred, sending debris flying. Two crew members and a fire truck were hit by the debris, but neither were significantly injured.

Crews were able to get the fire under control in around two hours.

The garage saw the majority of the damage, but the home and another residence across the back alley saw some minor damage.

Ryba said the garage is a “total loss” and a vehicle was also completely destroyed in the blaze.

A fire investigator was on scene on Friday night, but the investigation into the cause of the fire is ongoing, and it expected to wrap up Sunday.