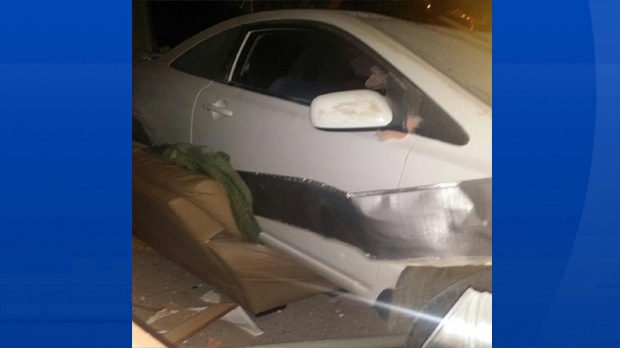 A 20-year-old man is facing charges, including impaired driving, after he lost control of a vehicle landed in a north Regina basement. Photo: Darrell Romuld

It was a rude awakening for people in a Regina neighbourhood last night after a Honda Civic crashed through the basement of a house.

The driver of the car was a 20-year-old man with several passengers. The car was traveling down Church Drive when the driver lost control at the intersection of Church Drive and Rink Avenue before colliding with the home.

Police received a call about a noisy party at about 3 a.m. While en-route they saw a man lying in the intersection of Church Dive and Rink Avenue.

A dozen people were outside the home and no one was in the basement.

The man who was driving the vehicle, Collin Bradley Guillet, was still on the scene. He is facing charges of impaired driving, driving with a blood alcohol level exceeding .08, and dangerous operation of a motor vehicle. He will appear in provincial court at Provincial Court at 2:00 p.m. on Friday, July 3, 2015.

There were no injuries to the driver or the passengers.