Here's a closer look at COVID-19 cases in Regina, Saskatoon

REGINA -- For much of the past two months, Regina and Saskatoon have been on different COVID-19 trajectories.

Beginning in late February, the Queen City saw its case numbers start climbing, eventually passing the Bridge City for the province’s most total cases during the pandemic on April 4.

However, that trajectory flipped on Tuesday with Regina reporting 30 new cases compared to 70 found in Saskatoon.

Regina’s total marked the lowest single day total in over a month for the region and a possible sign the situation outside of the city’s hospitals is improving.

"We can’t let our guard [down], we have to see a further downward trend in Regina."

When the public health measures were tightened in Regina on March 24, closing restaurants and bars to in-person dining and prohibiting private indoor gatherings, the city had a seven-day average of 104 new cases per day.

Now five weeks later, that number has dropped to 75. 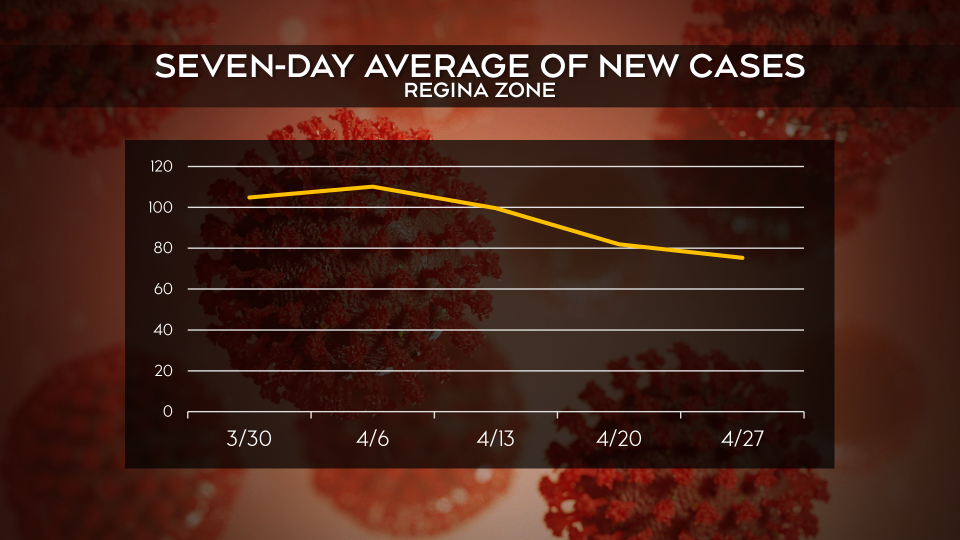 However, while case numbers are going down, the average number of tests being performed has also dropped significantly from 1,254 per day from March 24-30 to 756 per day between April 21-27.

This has led to a test positivity rate over 10 per cent throughout April. 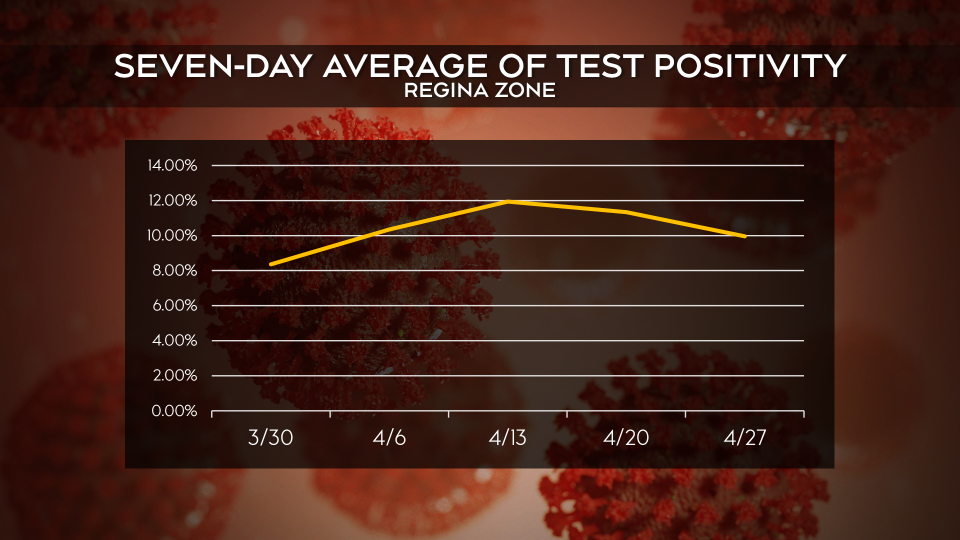 "We can’t celebrate yet, we have to stay the course," Dr. Shahab said.

"Test and trace is going to be an essential layer to make sure if there are pockets of COVID reemerging, we can quickly isolate, screen them for variants of concern or new variants and keep COVID at bay," he said.

Premier Scott Moe encourages anyone with symptoms to get tested.

"There’s testing capacity that is available for those that choose to be tested," he said. "If you have any concerns at all that you’ve been in contact or any symptoms, get out and get tested."

Hospitalizations in Regina remain a concern with the city’s intensive care units over capacity.

"What is happening in our hospitals, not just in Regina but across the province, is concerning when it comes to the variants of concern," said Saskatchewan Health Authority CEO Scott Livingstone.

"Even though our hospitalization rate has averaged lower, we’re seeing more hospitalizations in the first three months of this year than we did in all of 2020."

While the high test positivity and hospitalizations numbers in Regina remain a concern, the stricter measures have helped Regina’s case numbers stabilize.

Regina has stronger measures in place than the rest of the province and cases numbers are growing in other areas, especially Saskatoon, which reported a province-high 70 cases on Tuesday.

"We have to watch very closely, work very closely with public health in Saskatoon because we absolutely don’t want to see the surge that happened in Regina happen in Saskatoon," Dr. Shahab said.

Regina has the most variant cases in the province with 3,513 detected through screening, but Saskatoon has jumped from 27 at the start of April to 687, the second most in the province, on April 27.

"The larger the urban centre, the harder it is to control surges, you have to sometimes put in more stricter measures," Dr. Shahab said. "At this point, Saskatoon remains on the cusp, the portion of variants of concerns is trending up from less than 10 per cent a few weeks ago to 70 per cent."

Saskatoon was also one of four zones with a new P.1 variant case detected on Tuesday.

The first five cases of the variant were detected in the Southwest zone last week, but 14 more were added on Tuesday, including one in Saskatoon.

"This is not the time to let our guard down, especially as it relates to interprovincial travel and non-essential travel," Dr. Shahab said.

The premier added the province isn’t considering implementing an interprovincial travel ban, which has been seen in other provinces.