Hewitt Commentary: Mixed bag for the Riders in Vancouver 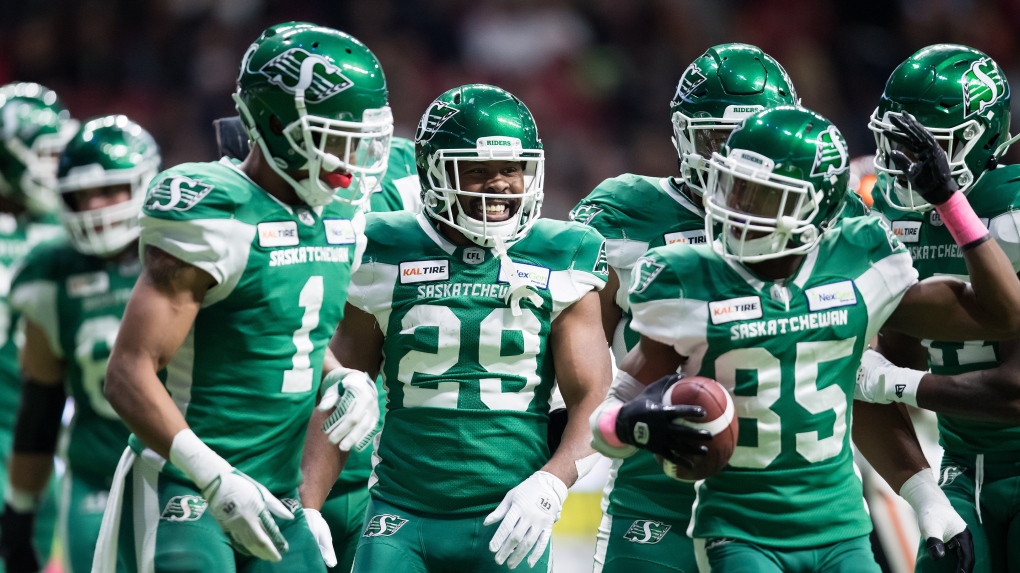 Saskatchewan Roughriders' William Powell (29), Shaq Evans (1) and Kyran Moore (85) celebrate Powell's touchdown against the B.C. Lions during the first half of a CFL football game in Vancouver, on Friday October 18, 2019. THE CANADIAN PRESS/Darryl Dyck

Friday night in Vancouver, the 11-5 Saskatchewan Roughriders defeated the BC Lions 27-19. 18,043 fans were in attendance, 12,567 of whom were cheering for the visitors.

How do I know that?

The victory was truly a mixed bag for the Riders.

On one hand, the prairie lads totally dominated the line of scrimmage on both sides of the old pigskin. On the other hand, the overall execution certainly needs some work if this club has any chance of getting to a Grey Cup.

The return of guard Philip Blake was welcome news as the Saskatchewan hoggies opened up gaping holes for running back William Powell. The star tailback rushed for 111 yards, averaging a sparkling 7.4 yards a carry.

The boss hogs also did a great job on Lion blitzes, particularly on a TD pass to Kyran Moore.

The BC offensive line has played better of late, but the Rider defensive front ran right over them. Lion quarterbacks were sacked 6 times resulting in several forced fumbles.

BC running back John White gained only 38 yards on 12 carries, and constantly ran into green coloured brick walls.

The all-Canadian defensive tackle trio of Charbel Dabire, Makana Henry and Zack Evans enjoyed a solid outing. Dabire and Henry have gradually improved throughout this season, so let’s give some credit to defensive line coach Mike Davis.

Impressively they stopped the run without the injured Micah Johnson.

Include AC Leonard in the improving category, he is becoming a force.

Charleston Hughes had two tackles, but he does so many good things around the football that can go unnoticed.

In Vancouver, Judge totaled four tackles and a sack. It is a given that he will receive the Rider nomination for the team’s outstanding Canadian.

While others have improved, how about middle linebacker Solomon Elimimian?

Right now Solly is playing to the form that made him one of the greatest defensive players this league has ever seen.

I thought this would be Elimimian’s last season, but with eight tackles and a sack in Vancouver, he is defying gravity and seems to be running downhill.

After all this praise for the defense, let’s remember, Irishman Danny O’Brien, in his first ever CFL start, is currently not that strong of quarterback.

Until this D shows they can stop Bo Levi Mitchell, the job won’t be done.

The other side of the mixed bag was execution. On offense the 2019 Riders have been pretty good in the red zone, but not in Vancouver. Blown opportunities resulted in a close score against a non-playoff team.

The Roughies went into the game with the second most penalties in the CFL. Nothing changed in Vancouver - 8 infractions good for 65 yards.

One of those penalties negated a 100 yard kick return, to the house, for Loucheiz Purifoy.

My condolences to the family of Gord Staseson. The former Rider President passed away a week ago at the age of 93.

I’m not sure the Roughriders would still exist without him.

Gord was instrumental in the 1979 Taylor Field expansion, including the installation of the team’s first ever artificial turf surface.

Gord was the godfather of the Plaza of Honour dinner.

Without Gord, no Gainer.

Gord was a natural born leader.

He made everyone around him enthusiastic.