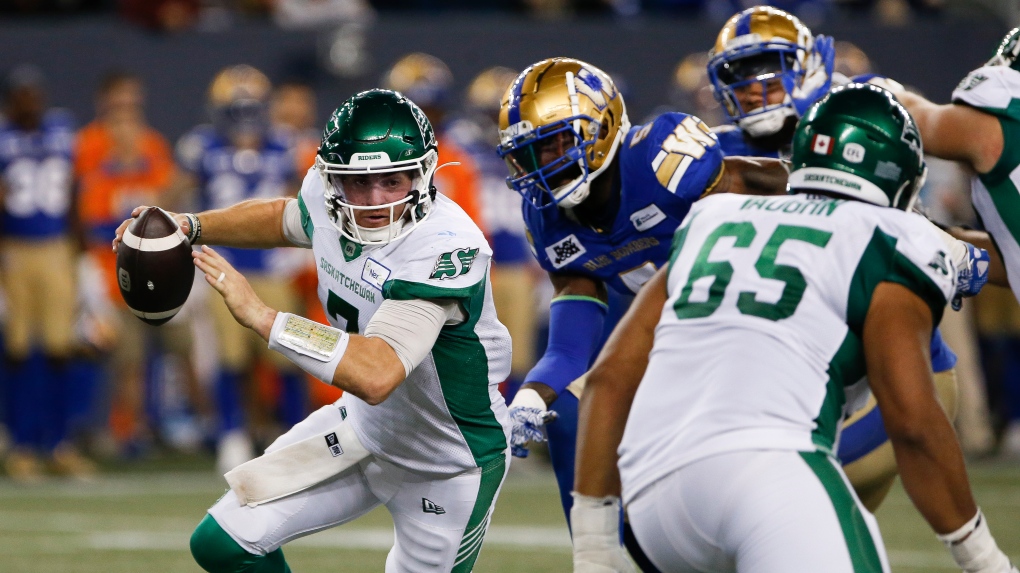 The Winnipeg Blue Bombers forced six turnovers including a pair of interceptions in a 31-13 win over the Saskatchewan Roughriders on Friday night at IG Field.

The Bombers forced three turnovers on downs and a fumble along the way.

Roughriders quarterback Cody Fajardo completed 26 of his 38 pass attempts for 307 yards before being replaced late in the contest by back-up Mason Fine.

Fine finished the night completing four of his five pass attempts for 25 yards. Fajardo was also the team’s leading rusher, using his legs nine times to gain 36 yards and a touchdown.

Riders centre Dan Clark, who suffered a broken fibula and displaced ankle earlier this season, returned the line-up on Friday. The veteran offensive lineman told reporters he has seven screws in two places in his leg.

Winnipeg Blue Bombers quarterback Zach Collaros completed 14 of his 25 passes for 296 yards and four touchdowns on the night.

Schoen’s touchdown was his 11th of the season, setting a CFL record for a rookie receiver.

Kicker Brett Lauther connected from 14 yards out to bring them to 13 points, where they’d finish.

Saskatchewan does remain in the playoff picture with a 6-9 record but the chances are getting bleaker with each loss.

The Riders will face the Hamilton Tiger-Cats in a must-win showdown on Oct. 7.

An Abbotsford police officer was caught on camera punching a man twice in the face during the course of an arrest this weekend, prompting a review by the department and a provincial watchdog.

Pence calls on Trump to apologize for dinner with antisemite

A growing number of Republicans, including former U.S. Vice President Mike Pence, criticized Donald Trump on Monday for dining with a Holocaust-denying white nationalist and the rapper formerly known as Kanye West days after launching his third campaign for the White House.