Off the grid: Sask. residents looking for alternative power sources 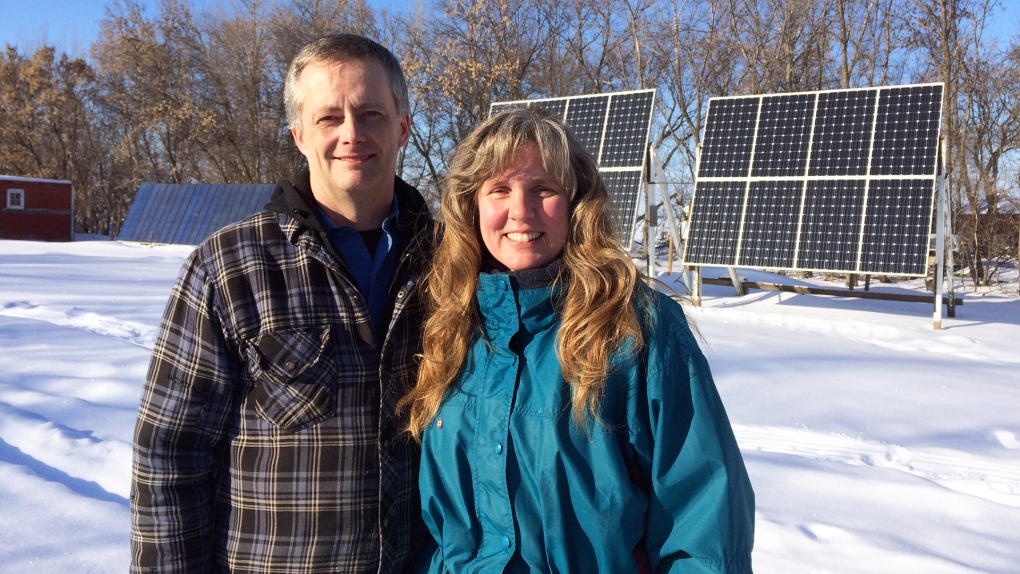 Brian and Yvonne Bueckert generate 100% of their own power. (TAYLOR RATTRAY/CTV REGINA)

With a flick of a switch, most people in Saskatchewan have instant access to electricity from the power grid. But not Brian and Yvonne Bueckert. The couple live on a farm near Yorkton, and generate 100 per cent of their own power.

“When we switched to off-grid, we just called SaskPower and asked them to disconnect,” said Brian Bueckert.

As an electric engineer, Brian has always been fascinated with technology. Fifteen years ago, the couple began working to generate their own power on their farm.

“We had two systems: we had SaskPower in the house, but I was also experimenting with the solar component, learning how much solar you’re going to require, how big the batteries need to be, how big the inverter needs to be, that sort of thing,” said Brian.

They started with a small windmill and four solar panels. Then, two and a half years ago - with $30-thousand worth of wind and solar power in place- they made the jump.

“The first year, I often thought about it,” said Yvonne. “I would look at the meter and (wonder), ‘How much power do we have and can I do this right now?’ But now I don’t even think about it.”

The system needs to produce at least six kilowatts of power per day for the household. Power is gathered in the windmill and solar panels, and travels through cables to batteries in the house, where it’s then dispersed wherever it’s needed.

Even on cloudy or calm days, the system is designed to produce more than enough energy for the household. On sunny days, excess energy is banked in the batteries – enough for three days’ supply. Levels are monitored on thermostat-like devices.

“It’s kind of like when you drove here today. You probably looked at the gas gage and said, ‘Do we have enough power to get here?’” said Brian. “So, this tells us every day how much fuel we have.”

“I really don’t adjust my life based on the sun or the wind, or the clouds, or whatever. Brain has oversized it to the point where I can do whatever I want whenever I want,” said Yvonne.

The Bueckerts are not the only ones to take advantage of renewable energy. People in the city are also looking to alternative power. Jeff Moore and his family are proud new owners of a 4-kilowatt solar system in Regina.

“Saskatchewan generates so much of its power using coal. So, environmentally, I thought that it would be a really, really good idea,” said Moore. “The other reason I guess is that I like saving money. The payback period on solar panels has come down so much in the past number of years that it just made good financial sense.”

While Moore isn't off the grid, his $12-thousand system will produce 90 to 100 per cent of his energy needs. Dwayne Snider from Advanced Energy connected the system to SaskPower's net metering program.

Moore's system can't bank excess energy, and SaskPower doesn't pay him for additional power he produces. But, Snider says energy savings outweigh the cost of the system in six to nine years. They also help with resale.

“The homes are actually selling for more money because of that, because people are starting to demand and recognize that utility bills are a fixed expense that are not going to go down,” said Snider.

According to SaskPower, more than 500 people across the province use renewable energy sources as an alternative power supply. But, as solar and wind power become more affordable, the number is expected to grow.