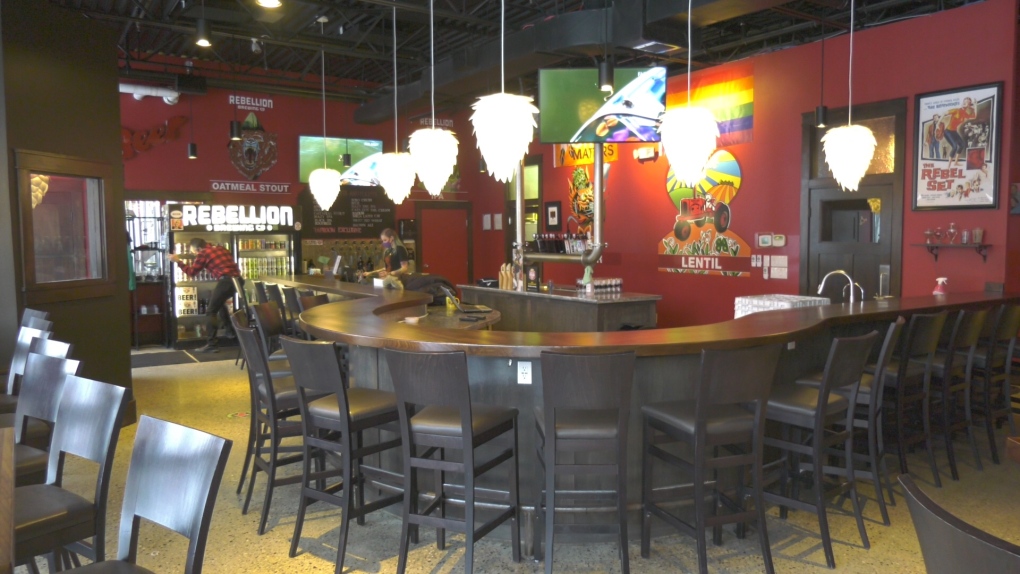 January is typically one of the slowest months of the year for restaurants and hotels.

However, many owners say the Omicron wave is adding even more strain to their revenue.

“January’s are terrible, this one is particularly terrible,” said Mark Heise, owner of Rebellion Brewing Co.

“Each day you show up and wonder what type of business you’re going to have to operate in terms of staff and customers.”

Heise said the taproom has been relatively lucky, with only one staff member currently off after testing positive for COVID-19. However, he says customers’ comfort levels are down, which means lower foot traffic coming through the doors.

“Right now there’s just a lot of uncertainty, a lot of stress, a lot frustration and to be through however many waves now, it just takes a toll on people,” Heise said.

Compared to a busy January, Heise estimates revenue is down 50 per cent. He made the decision to cut back the taproom’s hours of operation last week.

“That means some of my staff that were willing to work had to have reduced hours,” he said.

Some restaurants have had to temporarily close due to staff getting sick with COVID-19, but for the most part he says staffing has been, “manageable.”

According to Bence, the biggest challenge is getting customers in restaurants and guests in hotels, adding the accommodation sector seems to be struggling the most.

“When you take an already slow season and you cut it in half that means for some really, really tough times,” Bence said.

“One hotel, for example, lost $67,000 worth of business in four days just in cancellations.”

Bence called the situation “extremely dire” for hotel operators in urban centres, who pay hundreds of thousands of dollars in fixed costs each month. Right now, he said there is no revenue to offset those expenses.

“These are, for the most part, independently owned hotels. These are our friends and neighbours that own these assets that are now simply out of money,” Bence said.

According to the Saskatchewan Federation of Labour (SFL), employees in every sector are feeling the strain.

Saskatchewan is the only jurisdiction in Canada that does not have gathering restrictions and capacity limits in place. That means workers in the province are ineligible for the Canada Worker Lockdown Benefit.

The federal subsidy offers income support to employed and self-employed people who cannot work due to a COVID-19 lockdown. Those who are eligible, can receive $300 for each one-week period.

However, SFL president Lori Johb said Omicron is forcing businesses to close and cut back on staff even without a lockdown in place.

“I worry about workers that are working part-time, because many of them have to work more than one job and this would really affect their bottom line,” Johb said.

According to Premier Scott Moe, provincial government officials may ask the federal government to expand the benefit to individuals that are impacted as opposed to a blanket approach based on provincial lockdowns.

Moe added a lockdown in Saskatchewan would do more harm than good.

“That isn’t to say that there are some individuals that aren’t impacted by for example large gatherings not being able to come together in many cases or the five day isolation period,” the premier said on Wednesday.

The government is not considering new restrictions at this time.

Both Heise and Bence continue to say the way forward is planning, and hoping for a busy spring and summer, with festivals and events bringing customers and guests through the doors.

An 18-year-old gunman opened fire Tuesday at a Texas elementary school, killing at least 19 children as he went from classroom to classroom, officials said, in the latest gruesome moment for a country scarred by a string of massacres. The attacker was killed by law enforcement.

Lamenting a uniquely American tragedy, an anguished and angry U.S. President Joe Biden delivered an urgent call for new restrictions on firearms Tuesday night after a gunman shot and killed 19 children at a Texas elementary school.

Bill 96, the provincial government's controversial legislation aimed at protecting the French language in Quebec, has been adopted in the National Assembly.

Russia's invasion of Ukraine may have marked the start of "a third world war," and Russian President Vladimir Putin must be defeated "as soon as possible" if the world wants to preserve civilization, said billionaire and philanthropist George Soros.

Canadian musician Jacob Hoggard has emphatically denied raping a teenager and a young woman nearly six years ago, testifying Tuesday that both encounters were consensual and "passionate."

Provincial provider Hydro One said Tuesday afternoon that more than 142,000 customers in parts of Ontario were still without power after a devastating weekend storm.

Travellers who have a flight planned at Victoria International Airport (YYJ) on Tuesday afternoon are being warned of travel disruptions due to police activity.

Canada is sending an additional 20,000 rounds of ammunition to Ukraine for the Ukrainian military to use in its ongoing defence against the Russians. This ammunition—155mm calibre, as well as fuses and charge bags—is being donated, but comes at a cost of $98 million, according to the federal government.