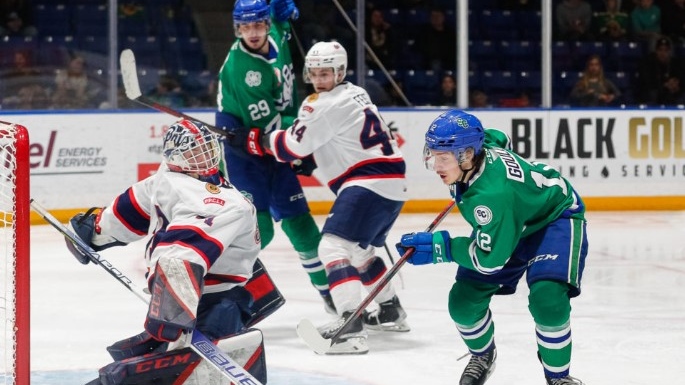 The Swift Current Broncos and Regina Pats will face off on neutral ice during this year’s Western Hockey League (WHL) preseason when the two clubs travel to Estevan’s Affinity Place.

Announced Tuesday by the Estevan Bruins of the Saskatchewan Junior Hockey League (SJHL), the exhibition contest is set for Sept. 13.

Proceeds from one third of the gate admission and the 50/50 draw will support the Estevan Minor Hockey Association.

Additionally, every child registered in Estevan Minor Hockey for the upcoming season will receive a free ticket to the game.

“After seeing the support of our fan base and the appetite for hockey during last years playoffs and Centennial Cup we want to continue to bring top quality events to the city of Estevan and Affinity Place,” Bruins president Josh Biggs said in a statement from the team. “This a great opportunity for people in Estevan and surrounding areas to watch projected NHL number one draft pick and Pats superstar Connor Bedard in our home rink.”

The Pats begin preseason play on Sept. 9 in Prince Albert, followed by a rematch in Regina the following night. The first game of the regular season is scheduled for Sept. 23 against the Moose Jaw Warriors at the Brandt Centre.

Previous exhibition contests played by the Pats outside of Regina included a game at Ochapowace First Nation in 2016 and a game in Shaunavon in 2011. The Swift Current Broncos last played a neutral site game in 2019 in Irvine, Alta. against the Medicine Hat Tigers.

“We’re excited for the unique opportunity to play in a market like Estevan,” Broncos general manager Chad Leslie said in a release. “The people of Estevan have a long history of supporting junior hockey and we’re thrilled to showcase our league and organization to them.”

The Bruins are set to kick off their own Saskatchewan Junior Hockey League regular season at Affinity Place on Sept. 16 against the Yorkton Terriers.

Help will arrive at the children's hospital in Ottawa next week as it continues to see "unprecedented volumes" of young patients suffering from respiratory viruses. A team of staff from the Red Cross will begin working at the hospital in the next week.

Montreal Canadiens goalie Carey Price has taken a stance against Ottawa's controversial Bill C-21, which would refine the definition of prohibited assault-style firearms -- drawing the ire of Canadian hunters who say the definition would outlaw weapons used within their practice. Meanwhile, the Liberals have repeatedly stated their intention is not to go after hunters but to restrict certain firearms designed for the "battlefield."

Feds 'not going to waste a lot of time' on Alberta sovereignty bill debate: LeBlanc

Intergovernmental Affairs Minister Dominic LeBlanc says the federal government is taking a wait-and-see approach to whether it may intervene when it comes to Alberta Premier Danielle Smith’s sovereignty act, but that it is not the focus at the moment.

The British government is looking at bringing in the military to help keep public services running if key workers, including in the state-run National Health Service, take strike action, the chairman of the governing Conservative Party said on Sunday.