Union members arrested at the Co-op Refinery picket line have all been released. All 14 of the people arrested have been charged with mischief.

According to Regina police, just two of the men arrested were from Regina. National Unifor president Jerry Dias was among the people arrested.

“The Regina Police Service has been clear that our role in this is impartial and focuses on public safety,” RPS Chief Evan Bray told media on Tuesday. 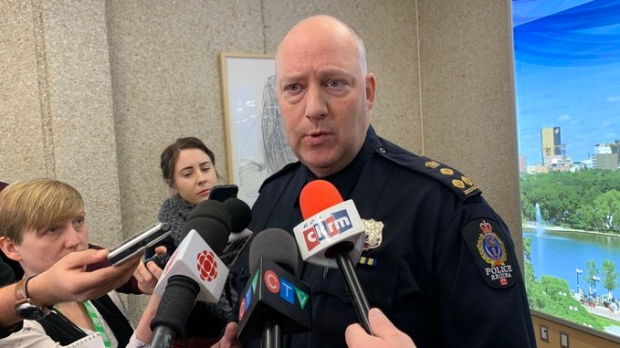 Bray said his officers arrested 14 Unifor members on Monday evening, and an ambulance was needed for a medical emergency, which officers were able to successfully coordinate.

Chief Bray stressed his respect for unions and the importance of job action.

“The upgrader and its employees are an integral part of our community,” Bray mentioned that most of the members arrested on Monday evening are not community members and have no vested interest in our community.

Bray said the officer that arrested Dias was “incredibly professional”, and the officer who made the arrest didn’t know who he was arresting. “It was after the fact that he learned this fellow was the president of the union”

Bray said the city is being held hostage by both Unifor and the Co-op.

Regina Fire indicated that emergency access points were obstructed to and from the refinery, and an order has been issued to remedy that situation.

Jerry Dias spoke to reporters on Tuesday, and said that at the core of the labour dispute is the fact that employees of the Co-op Refinery were told three years ago that their pensions would be safe.

He made a number of allegations against Regina police officers. Dias said he’s “never seen police behave like Regina police did,” and said the role of police should be to ensure situations don’t escalate.

Dias alleged that 50 RPS officers contributed to the escalation of the situation on Monday evening.

Dias also said the officer who arrested him was “aggressive” and said the Mayor is also on the side of the Co-op Refinery. Dias said Unifor plans to launch an investigation into the Regina Police Service.

The Government of Saskatchewan weighted in on Tuesday.

"Earlier today, I spoke with officials from both parties to communicate that the Government of Saskatchewan believes that the best agreements are reached at the bargaining table," Don Morgan, Minister of Labour Relations and Workplace Safety, said in an email.

NDP leader Ryan Meili called on the Premier to join him in calling on the refinery and Unifor to return to the bargaining table.

Scott Moe aggreed that both sides should return to the bragaining table.

Hundreds of Unifor members from across the country came to Regina on Monday to join the picket lines with the locked out refinery workers. The national union said it was taking over the blockade of entrances to the refinery because a court order ruled that Unifor 594 local members could only block trucks entering and exiting the refinery for 10 minutes.

Here’s the court order from Justice McMutry dated Dec. 2019. #yqr
Dias said he believes this order only applies to members of local 594. pic.twitter.com/Mkrlh8uIvx

Regina police officers were at the picket lines on Monday afternoon and said the members were acting against the court order. Arrests were made on Monday evening.

Union members built fences at the Co-op Refinery entrances to stop any traffic. Police towed a U-Haul truck with more fence pieces inside, but there were other parked vehicles blocking refinery access on Tuesday morning. Some of those vehicles had deflated tires, or tires removed altogether.