Regina homeowners are facing increases to the city’s mill rate and utility costs based on the proposed budget for 2022. 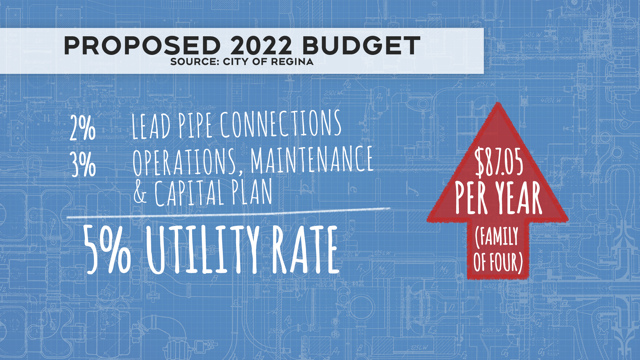 Two per cent of the five per cent utility increase will go toward covering the cost of replacing lead pipes.

The mill rate increase will raise costs for Regina residents by an average of $6.31 per month, or $75.72 per year. Those estimates are based on an average assessed home value of $315,000. 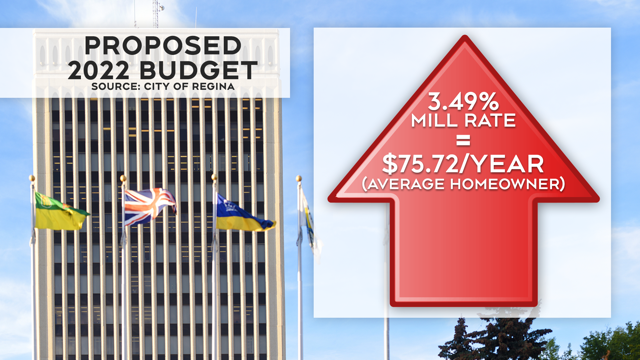 The rate increase will create funding for multiple initiatives, including $6.9 million for recreation programs, $6.3 million to support the city’s target of being renewable by 2050, $1.4 million for community safety and well-being initiatives, $1.2 million to create safer sidewalks and $1.0 million to make recreation and leisure activities more accessible for people with disabilities.

Dedicated mill rates for Mosaic Stadium (0.45 per cent) and the Recreational Infrastructure Program (0.50 per cent), and a 1.32 per cent increased investment in the Regina Police Service are included in the proposed mill rate. 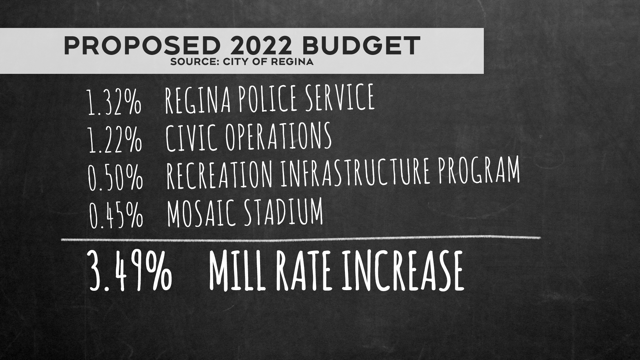 The city said $136 million is proposed for the 2022 General Capital Fund to cover infrastructure maintenance, renewal of roads, bridges, sidewalks and city-owned and operated facilities.

An additional $119 million is set aside for work related to Regina’s water utility, including work to improve water pressure and replace and upgrade water meters.

City manager Chris Holden said he understands the 3.49 per cent mill rate increase is significant, but adds it’s necessary for the city’s future.

“It’s a fairly steep increase in terms of a per cent when you look at cost per month for the average homeowner,” Holden. “Affordability truly is an individual position and perspective. If we don’t raise the mill rate increase, then that compounds year over year. It puts us in a position where we would struggle to make the capital investments we need to make in order to provide those services.” 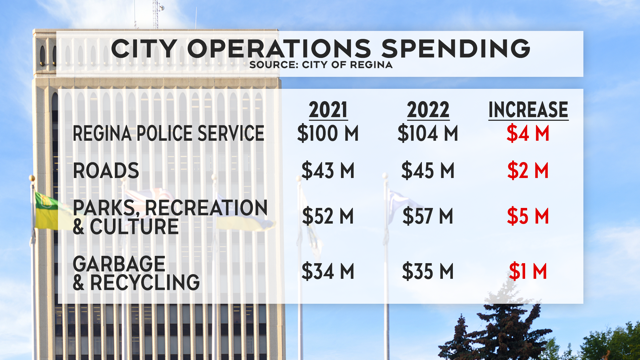 The proposed 1.32 per cent increase for the Regina Police Service would bring the total operation cost up to $104 million - a four million dollar increase from last year’s budget.

He said if council feels either too excessive or insufficient, they would make a recommendation back to the board of police commissioners to review.

The police budget will be discussed and deliberated with council starting at 9 a.m. on Dec. 15.

The proposed 2022 budget includes $875,000 for a Community Safety and Well-being Plan. It is new funding that was not included in previous budgets.

The city manager said the plan focuses on a broader approach to certain issues including homelessness, food security and racism.

“The Community Safety and Well-being Plan incorporates a governance structure that brings community leadership together. There’s an advisory committee that would be led by Mayor Masters,” he said. “It really is bringing agencies together around the table and looking at innovative ways to really deal with the issues.”

Holden said the $875,000 is about making sure structures and plans are in place that may not have been discussed before.

He said Camp Hope, a tent village that was operating in Regina’s Pepsi Park for more than a month, highlighted the need for this plan to take action.

“The Community Safety and Well-being plan was coming forward prior to Camp Hope. That said, if we have emergent issues come up throughout the year that are outside of our approved budgets, then we will look at what our financial flexibility is and make some investments,” he said. “The [plan] is critical in the time that it will come forward because that will then require partners to come together and work collaboratively.”

He said it could help find a long term solution for when the six-month temporary shelter ends.

“Everyone realizes the clock is ticking and we need to find a more permanent, sustainable solution,” Holden said.