Q & A: Former MP Goodale reflects on time in office, anticipates next chapter 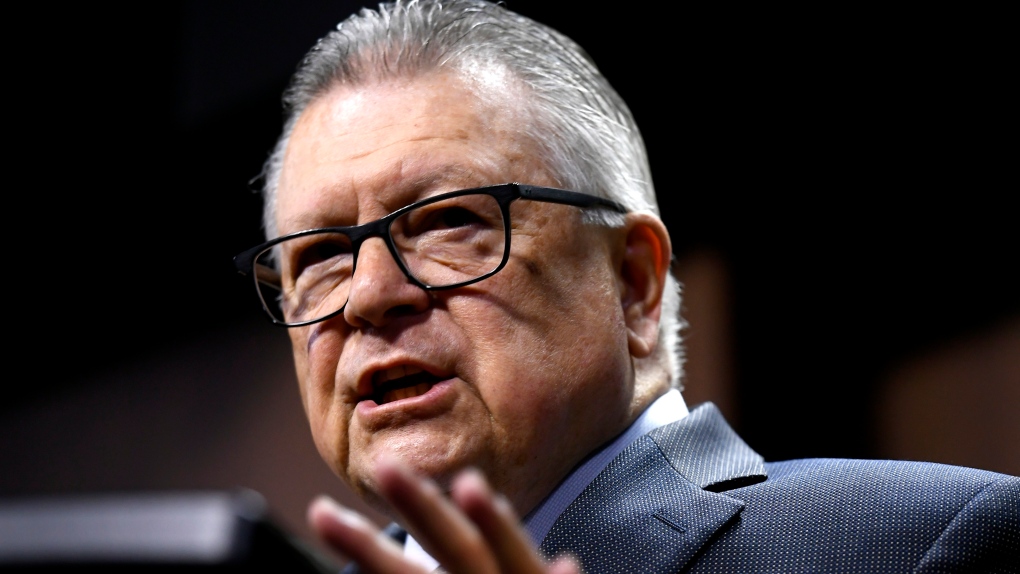 Minister of Public Safety and Emergency Preparedness Ralph Goodale speaks during an announcement on Parliament Hill in Ottawa on Thursday, May 16, 2019. THE CANADIAN PRESS/Justin Tang

REGINA -- CTV Regina's Cally Stephanow sat down with Ralph Goodale to discuss his time in politics, and what's next for him.

CTV: How have you been in the last couple of months?

“Well very busy actually,” Ralph Goodale said. “It’s nice to have a little bit of downtime over Christmas and New Years’ and spend time with my wife and family and meet with friends and just relax a little bit. There’s not much time to do that when you’re on the political treadmill, also there was a little bit more flexibility this Christmas. At the end of a period in parliament that spans 31 years, there’s a lot to do to unwind that. It’s been a process of decompressing and in a way you feel a bit disconnected as a result of that, but on the other hand it’s also good to have a little more flexibility, a little more free time, especially time for family and friends and catch up on things that were probably neglected over the last 31 years.”

CTV: Do you have an idea of what’s next for you?

“I’m thinking through what the right combination of things will be for the future and it’s hard to say at this point,” Goodale said. “I've had some good conversations with people in the business community, in the academic community also in government, and international. We'll think all of that through and try to make a good solid balanced decision for the future about what the next steps are.”

CTV: Do you think you would ever run for office again?

“I don’t think so,” he said. “I will always be interested in the governmental processes, in policy development, in program delivery and grappling with issues like the alienation in Western Canada for example and how that can best be dealt with. I’ll always be interested in the issues that effected to portfolios for which was a minister especially finance and public safety, those were the most recent. Before that public works, natural resources, agriculture and coming from Saskatchewan you’re always interested in agriculture and resources. There will always be a keen interest in those public policy questions and I’ll try to find a way to contribute to the discussion but I don’t see another occasion for which I would be a candidate.”

CTV: Do you think there is a reason to be concerned about representation for Saskatchewan?

“Representation is always a critical thing,” Goodale said. “It is always better, far better, to be represented than to be not represented. The Government of Canada is going to have to work very hard to make sure that the voices of Regina and the community are heard and taken into account. I’m very glad the Prime Minister has reached out to Mayor Fougere for example, so has the deputy minister and the new minister of the environment and natural resources. That line of communication has to be thoroughly nurtured and it will incumbent on the Prime Minister and his ministers to make sure that that happens. It would be easier, it would be more effective if there was someone from Regina sitting there at the cabinet table. That would be the most direct way to do it, that option has been denied for the time being so we’ll have to find other ways to make sure that the proper input from Regina is forthcoming.

CTV: What are some of your favorite moments from your time in office?

“I kept on for two reasons,” he said. “One, because of the tremendous people that you had the opportunity to get to know and to work with. Whether those where the volunteers in the constituency organization that worked on the election campaign or more recently in my portfolio of public safety, working with all those amazing first responders around the country and really around the world. The kind of people who are in Australia right now fighting those horrible fires. But the firefighters, the police officers, the paramedics, the border officers, the correctional officers, patrol workers, all of those people who dedicate their lives to keeping Canadians safe. Not to mention the spies that work for CSIS and all of those people who the jobs that we don’t discuss publically. But they are amazing people, they put their lives, quite literally, on the lines everyday to safe guard the lives of other people who they will never know. It’s a tremendous honour to work with them and all the others whether it was in public safety or finance or public works or natural resources or agriculture, to work with the stake holders. It’s the people in the process that I think keeps you continually interested and anxious to tackle the next issue. That’s the side of it I think I will miss the most, the daily interaction with those people in the political process. Whether it’s in cabinet, in caucus, with the people across the floor, the stakeholders that are involved in various issues. It’s that human side of it that I’ll miss the most.”

CTV: Where does your passion from Saskatchewan come from?

"They always say home is where the heart is that this is where my roots have always been,” he said. “I don’t think you ever shake, or you ever could shake all the blow dirt and dust out of a Saskatchewan farm boy, it's always there."

CTV: For the voters who kept you in office for eight consecutive terms, what’s your message to all of them?

“Just enormous gratitude,” Goodale said. “People have been so loyal over so many years, over so many elections. Eight consecutive wins in Regina-Wascana, and for people to have renewed their trust and support for that long and that often, it’s a great privilege to be able to serve in parliament and to represent people, it’s a rare honour and it’s one that I am enormously grateful for. When you go to the door and you ask people for their vote, you're asking for the single most precious thing that they have to give in a democracy. And I will always be grateful for the fact that people gave me that trust and that vote for so many years."