REGINA -- Saskatchewan Conservation Officers are sharing a rare story of two whitetail bucks that were locked together by their antlers. One of the bucks was dead.

Photos and a video were shared on Facebook by the Saskatchewan Association of Conservation Officers, who said the incident happened on Dec. 18.

“The officer [Jillian Moldenhauer] was able to get within about 15 meters of the deer, and using her patrol shotgun loaded with a lead slug, was able to shoot the locked antlers, breaking the deer apart. The deer, once freed from his dead weight, ran off towards a valley to recover from its stressful ordeal,” the Facebook post reads. 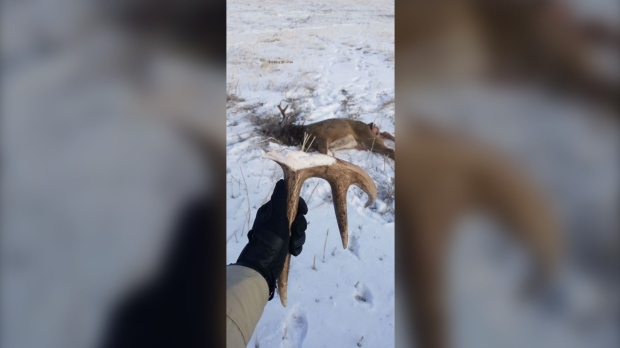 The CO was called from Rowan's Ravine to deal with the issue, just south of Southey. The caller said one of the deer was dead and had been partially eaten by coyotes.

"I know the officer felt that the shotgun with a rifle slug in it would have been the best tool to separate the two bucks that were locked," CO Daryl Minter said.

The post aimed to remind hunters that CO’s are trained professionals in the use of guns, and a similar act should not be attempted by members of the public.

“Despite how good of a shot you think you are; you may be liable for any accidental killing,”