The percentage of vaccinated people testing positive for COVID-19 in Saskatchewan appears to be climbing, however the province’s top doctor says the new trend is not something to worry about. 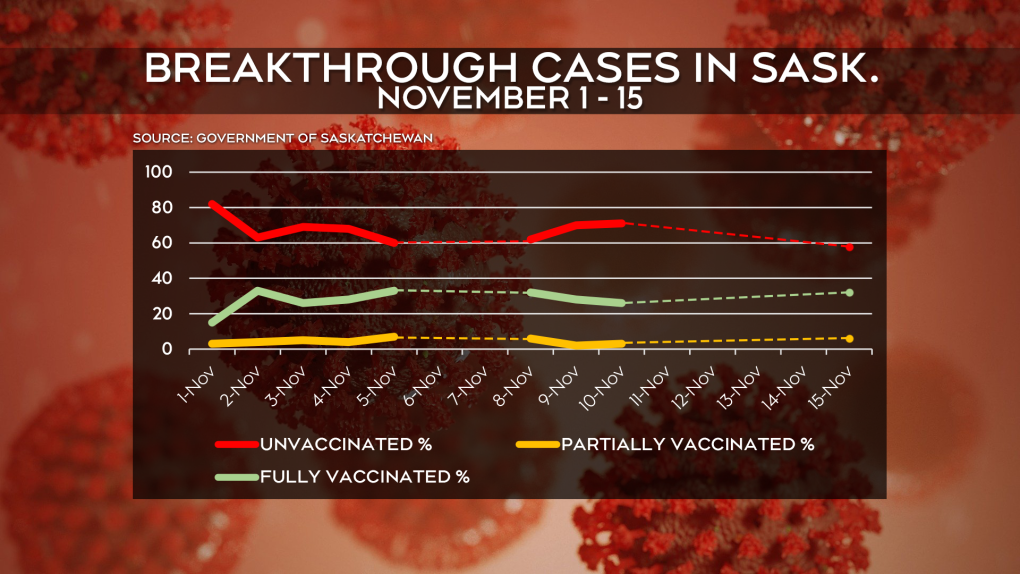 He added the province is watching the rate of infection numbers.

“Because the vast majority of the population is vaccinated,” Shahab said. “Also, severe outcomes right now in people who are under 65 are limited exclusively, for the most part, to people who are unvaccinated.”

According to the Saskatchewan Health Authority (SHA), the COVID-19 vaccine is similar to the influenza vaccine, meaning it’s meant to minimize symptoms, transmission and hospitalizations, not to eradicate the virus.

During questioning in the Legislative Assembly Tuesday, the Saskatchewan NDP said the province needs to keep an eye on those breakthrough cases.

“Many people have gotten COVID-19 because of the choices of the premier to have no restrictions in the summer, ignoring the modelling numbers and to increase the level of COVID-19 circulating,” Meili added.

Responding to a question from Meili during Question Period on Wednesday, Premier Scott Moe advocated for the province’s current health restrictions and noted the rising vaccination rates.

Premier Scott Moe said as COVID-19 numbers come down, it’s expected that the percentage of vaccinated people catching the virus will increase.

“Thankfully vaccines are not only effective in preventing you from getting COVID, in many cases, but largely, largely reduce your chances of ending up in hospital,” said Moe.

Currently in the province, residents 50 and older in the Far North region, 65 and older in the general population and health-care workers who recieved their second COVID-19 vaccine dose more than six month ago are eligible for a booster dose.

The National Advisory Committee on Immunization has approved the use of a booster dose for anyone over the age of 18.

Shahab said the province is currently analyzing data around transmission rates after booster doses are given and if it needs to expand age eligibility in Saskatchewan.

He added those announcements will come at a later date.