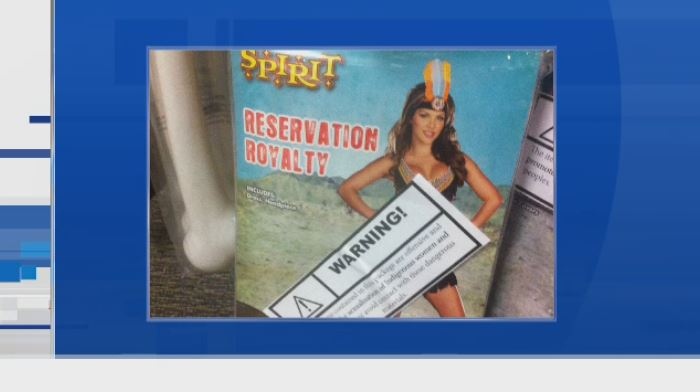 The labels read, “The items contained in this package are offensive and promote the sexualization of Indigenous women and peoples. Please avoid contact with these dangerous materials.”

“Every year there is a struggle over these costumes,” said Chris Kortright, a member of the Saskatchewan Coalition Against Racism.

“The action itself was a joint action between Indigenous folks and non-Indigenous folks. We had pieces of paper that had a warning label on one side and information of Missing and Murdered Indigenous Women and Girls on the backside.”

Kortright said they are more than just offensive, “The more important part is it’s precisely costumes like this that sexualize and racialize Indigenous women’s bodies and makes it ok to sexualize them that actually leads and lays the foundation for a culture in which we can have over 4,000 Missing and Murdered Indigenous Women.”

The store’s manager was then presented with a letter stating, "As a business operating in Treaty 4 Territory, you should want to foster inclusive business practices. Having items of this nature are racist and offensive. There is nothing respectful about an outfit called, "Pocahottie."

“The companies knows what they’re doing and they’re making money off of it,” said Kortright.

CTV was not allowed in the store and the manager was not available for an interview. Calls to Spirit Halloween’s head office were also not immediately returned. In downtown Regina, reaction to the costumes was mixed.

“It’s disrespectful to women, to First Nations, to Native Americans all around. I don’t agree with it at all,” said one man.

“I wouldn’t like it if somebody wore that. That’s pretty racist but that's just my take on it,” said another person.

"If somebody wants to wear it, that’s up to them, it’s Halloween,” said a woman.

Kortright, S.C.A.R. and Colonialism No More says they will continue to make sure the Native American costume will stay off store shelves.