REGINA -- A Regina family is advocating for more flexibility in the COVID-19 restrictions after a traumatic experience.

Ashleigh Woytuik and her family are in shock this week after her father, Richard Baron, was diagnosed with a brain tumour.

"This just came out of the blue, we were all very blindsided by it," Woytuik said.

On Wednesday, Baron started losing his memory, he couldn’t remember his grandchildren’s names and thought it was July 4th. After being taken to the Pasqua Hospital by ambulance, it was discovered that he had a tumour on his brain the size of two large grapes.

The location of the tumour is causing the cognitive issues.

Baron’s wife, Belinda Chorney, was allowed to be with him at the Pasqua Hospital, but after he was transferred to the General Hospital for further tests, she was told she would no longer be able to visit due to the COVID-19 restrictions in place.

"Being up there and not fully grasping what’s going on, that just adds a while different dimension to things," she said. "He isn’t able to express his needs that he has in that moment or to understand what’s being told to him by doctors." 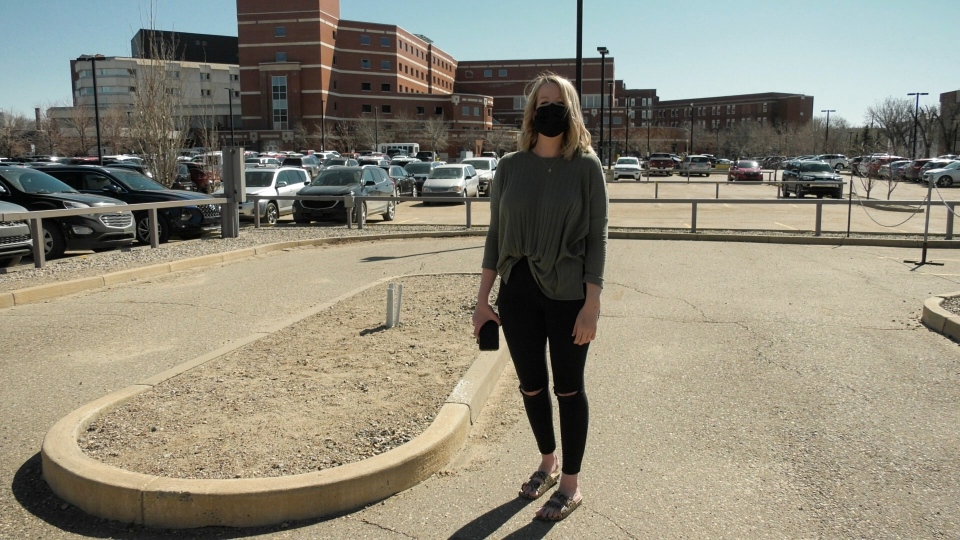 Ashleigh Woytuik at the General Hospital in Regina on Friday. (Marc Smith/CTV News)

The General Hospital was moved to level three restrictions due to the increase in COVID-19 cases in Regina. At this level, family presence is limited to end-of-life care only and under specific circumstances.

"The decision to further restrict family presence is not taken lightly," the Saskatchewan Health Authority said in a statement to CTV News. "These measures are in place to keep you, your loved ones and health care workers safe."

Government officials said there needs to be an ability to adjust the restrictions in certain situations.

"I would hope that we’re making allowances so that people can ultimately communicate with their health care professionals and I hope that possibly in this case it may have been a misunderstanding," Premier Scott Moe said.

"We can’t be so rigid that we’re not making sense anymore," NDP Leader Ryan Meili added. "If somebody really needs that accompaniment and I’m actually surprised with the given rules that’s what his experience was."

Woytuik said the hospital staff have been compassionate and helpful during the situation, but are limited by the restrictions.

"There absolutely should be exceptions made for people when their loved one is being admitted to a hospital that they can go and be with them and be support for them, especially in a situation like this where it’s such a traumatic diagnosis," she said.

Chorney was eventually granted access to be with her husband when he received his CT and MRI results on Friday. He was diagnosed with lung cancer that has also spread to his brain and is being released to rest at home before beginning treatment next week.