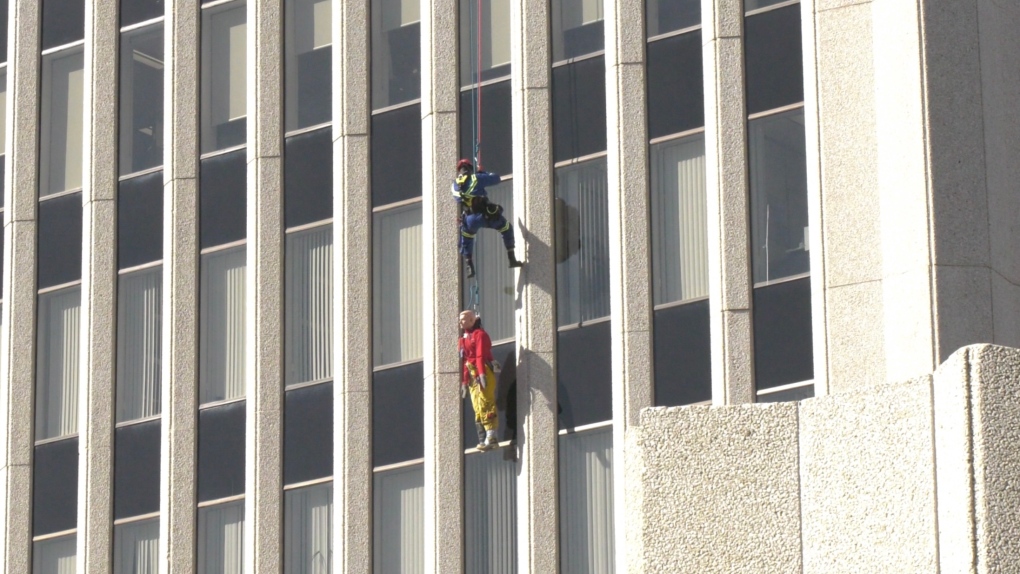 A firefighter repels down the east side of City Hall to reach the practice dummy. (David Prisciak/CTV News)
REGINA -

The Regina Fire Department’s technical rescue teams were conducted their bi-annual rope training drill on the east side of city hall on Friday.

The technique they were practicing is called a “pick off,” and is one of the many maneuvers that are used in the field.

“Basically, what it is, is that if a window washer or a worker that was working on the outside of the building gets tangled up in his own system, we’re able to lower a rescuer down and pick him off by putting him onto our system,” Kerry Gardner, a training captain with the Regina Fire Department, said. “We would then safely lower him down to the ground with our rescuer.”

The last time this specific technique was used was in 2011, when two workers were stranded on the 19th floor of Hill Centre Tower II. The rescue was a success and the workers were uninjured.

The department has four Technical Rescue Teams, one for each platoon. All four will be practicing their “pick offs” until Saturday.

“We try to come down here at least twice a year,” said Gardner. “Once in the spring and once in the fall.”

The practice runs on downtown skylines is preceded by a lot of practice at the fire halls. This is so the firefighters can “get the winter rust off,” and get familiarized with the process, according to Gardner. But rescues from the sides of high-rises are not the only thing that the rescue teams do.

“Not only do we do this but were also called for confined space and any low angle rescue in case anyone is stuck in a ditch or a hole. So, our technical rescue team isn’t just the rooftop here, we can do a whole lot of things,” Gardner said.

The simulated rescue at city hall drew a lot of attention from onlookers walking and driving by.

“It’s nice for people to know that we don’t only fight fires,” said Gardner.