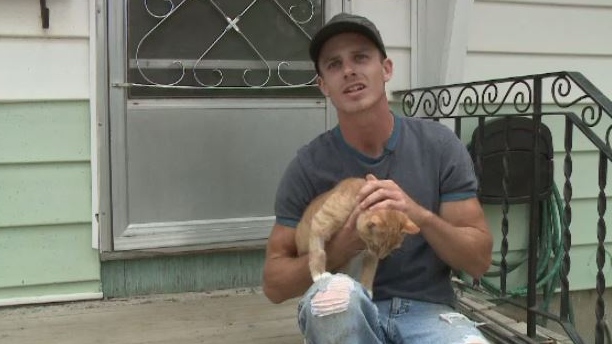 A Regina man is calling the death of his cat suspicious.

Kyle Molema went for an afternoon walk last week and left his cats - China and J.A. Williams - harnessed to a pair of leashes in the front yard.

When Molema returned, the cats were as he left them. He went inside and continued to watch the cats through the window and eventually fell asleep on the couch.

“I thought it would be okay to leave then outside for a bit longer,” Molema said. ‘Seeing how it was still daylight.”

When he woke up, the cats were no longer harnessed to their leashes. When Molema looked out the window, he saw China lying motionless on the sidewalk.

“I knew the leash didn’t reach that far,” Molema said.

Upon further inspection he found that China was dead, and the other cat was hiding nearby.

Molema initially assumed that China was attacked by another animal, or that the cat had gotten off leash and was hit by a vehicle.

The custom clasp that kept the cat in place had been undone, which led Molema to believe a person may have committed the act.

“Our recommendation is that if you do have your cat out on a harness to always be watching them,” Bill Thorn, director of marketing and communications for the Regina Humane Society, said. “You never want to leave your cat unattended,”

Molema said he reported the incident to the Regina Police Service.