Regina man runs over 1,000 kilometers to fundraise for cancer centre

Richard Exner is a man on a mission. He started his challenge of running every street in Regina back in May to raise money for the Allen Blair Cancer Centre. Five months, later he’s almost finished.

Exner is an accomplished runner already. For a solo charity run in 2014, he ran the outskirts of Regina. In 2017 he ran from Moose Jaw to Regina, a 65 kilometre feat.

But for Exner, the fact that he’s running that far isn’t important. What’s important is why he’s doing it.

“I’ve had a couple of family members who have lost battles with cancer,” he said. “They’ve been patients at the Allan Blair Cancer Centre and it was very helpful for them. So it’s near and dear to my heart.”

He explained the running challenge is the least he can do to support the center in some way after they helped him and his family.

“The perseverance that it takes to battle cancer, as a patient and as a family, right?” he said. “No one’s alone as they battle cancer. So, I’m just kind of running and raising as much awareness, support and donations as a guy can.” 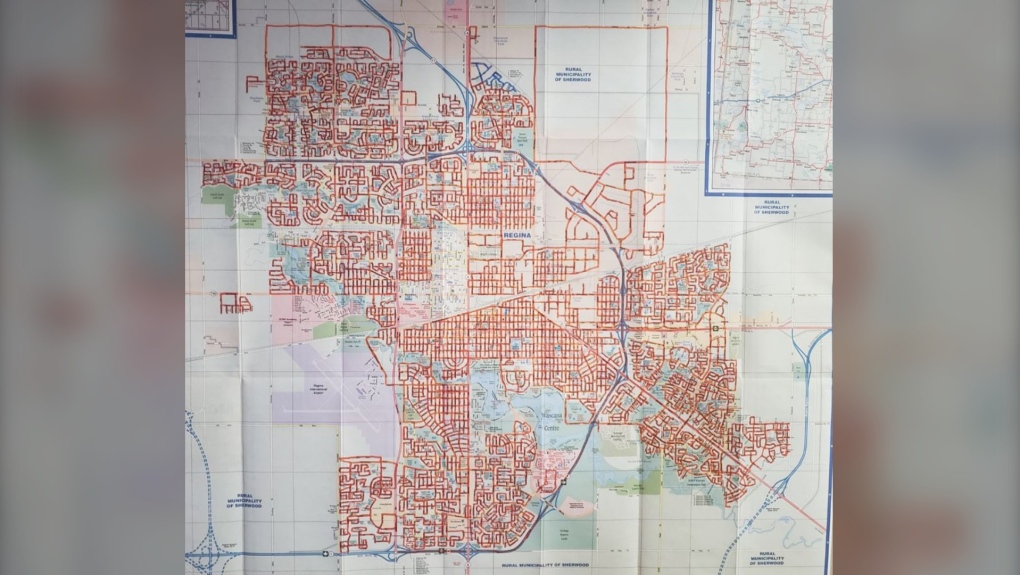 A map of Regina shows the roads Exner has run so far. (David Prisciak/CTV Regina)

Nora Yeates, the CEO of The Cancer Foundation of Saskatchewan, which fundraises for the Allan Blair Centre, as well as several other programs and facilities pertaining to cancer treatment in the province, said she’s amazed by Exner’s challenge and commends him for efforts.

“Its people like Richard that selflessly go out and give back by doing something,” she said. “It’s that selfless generosity that time and again we continue to see in this province. It’s about caring about other people and putting other people first, and you know, it’s what charity’s’ made of.”

With the finish line in sight, Exner is happy with the challenge and hopes it will be a success.

“I would like to hope that it’s a success,” he said. “I’ve been able to basically finish the challenge. So, me personally it’s a success and you know even if one person donates then I’m going to consider that worthwhile.”

Exner plans on completing his final run-on Saturday and finishing at the bridge over Wascana Creek near the intersection of Ritter Avenue and Dorothy Street. The location has a special meaning to Exner.

“Growing up, my dad and I, he was a big canoer, so we would always canoe to that bridge and turn around and go home,” he explained. “So, it’s kind of a fitting ending place.”

Exner plans to donate a dollar for every kilometer he’s run as a part of the challenge. To support his fundraiser, you can visit the Cancer Foundation of Saskatchewan’s website.