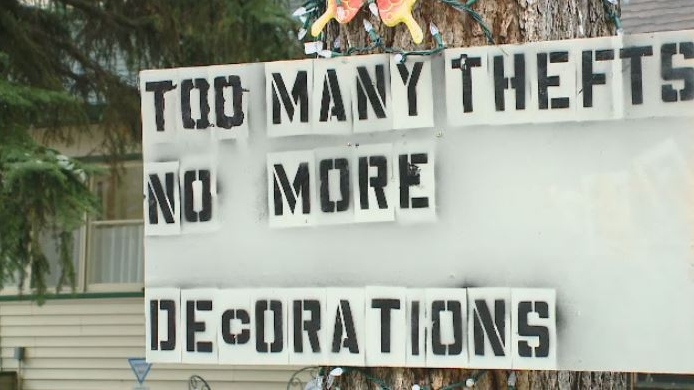 A Regina man known for decorating his home on holidays announced the spectacle has come to an end.

Roch Dupont’s home on Regina Avenue has a sign hung on a tree that says he will no longer put out decorations, and thieves are to blame.

“This year I’m not doing Halloween or Christmas like I used to,” said Dupont. “It’s too stressful to have to worry about something being taken.”

Dupont’s home has become a landmark in the city over the five years he has lived there. He was known to have decorated his home with thousands of lights and other trinkets for every occasion, including Valentine’s Day, Canada Day, and even Cinco de Mayo. The hobby was estimated to cost him close to $10,000 every year.

Although the decoration thefts were particularly disheartening, they are not the only property he has been robbed of lately.

“Our vehicles have been broken into about 20 times since January,” Dupont said. “Now I don’t even lock my vehicle anymore. It’s just not worth it.”

Dupont said the reason he and his wife were originally so dedicated to decorating their home was to bring the community together. He enjoyed having people knock on his door and express their delight and admiration. Now, he is instead receiving knocks from people who are sad and disappointed.

Laura Peachy is one of Dupont’s neighbours who said her children used to love his home’s festive displays.

“It always adds to every occasion to have their lights and decorations,” said Peachey. “It was always a delight to see what they were going to put up.”

Dupont said he might consider starting again in future years, but for this year, his house will remain bare.

“You put in all this energy to put all these decorations up to make people happy,” said Dupont. “But in an instant it’s all taken away by people who don’t seem to care about being in a community.”