REGINA -- People in Regina joined with others across Canada in remembering the victims of the École Polytechnique massacre on Friday, 30 years to the day after the violent events in 1989.

On Dec. 6, 1989, 14 people were killed and another 13 were injured in a mass shooting at the Montreal engineering school.

The shooter claimed he was “fighting feminism” when he walked into a classroom and asked the men inside to leave the room, before opening fire on the nine women, killing six.

The shooter then moved through the corridors, cafeteria and another classroom while specifically targeting women for around 20 minutes before turning the gun on himself.

The massacre is the deadliest mass shooting in Canadian history.

As a result, Dec. 6 has been named the National Day of Remembrance & Action on Violence Against Women, and many in Regina contributed in commemorating the somber anniversary.

Tara Molson with YWCA Regina was part of a group handing out red roses at the Cornwall Centre Friday morning, saying Saskatchewan still has problems of its own when it comes to violence against women. 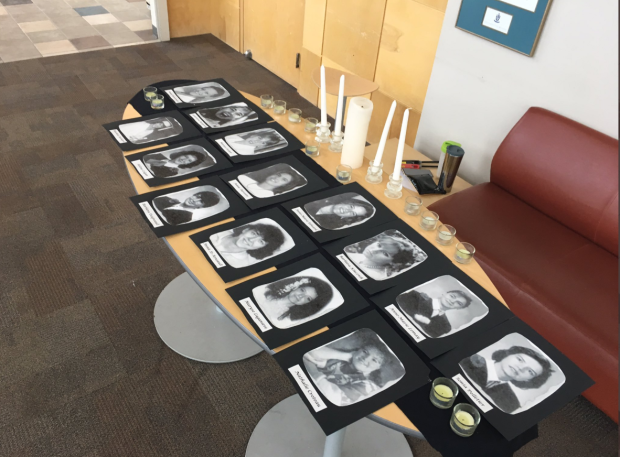 At the University of Regina, a vigil was held honouring the 14 women killed.

White ribbons were given to those in attendance, each of the victim’s names were read as candles were lit, and a moment of silence was heard.

A number of women spoke to the crowd that had gathered, including Hibba Syeda, an engineering student at the U of R.

“It’s very devastating for me, as I’m a female engineering myself, to only imagine going through what they have gone through and what their families have gone through,” Syeda said, adding the past cannot be forgotten. “It’s important to keep this message going because we as a society are a representation of our past, and this will dictate what our future will hold.”

“As a female engineering student, I can represent and honour them today.”

Syeda and others from the Faculty of Engineering have also created a campaign asking other students to stand with them against violence towards women.

It’s hoped by continuing to mark the day of the shooting, it can continue to start conversations about addressing violence against women in Canada.

With files from CTV News Montreal