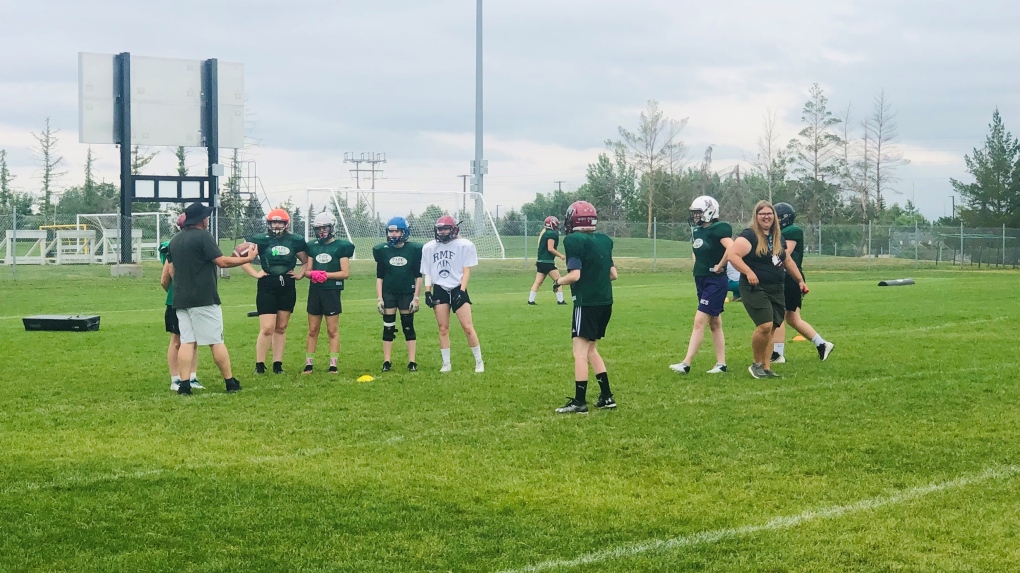 Team Saskatchewan is seen practicing ahead of Wednesday's games. (BritDort/CTVNews)

The first-ever Women’s National Under 18 Football Championships are taking place in Regina at Mosaic Stadium.

“This is a huge opportunity for women’s football. We’ve been growing and building this sport and now to actually be recognized and starting a U18 tournament is really exciting,” special teams coordinator for Team Saskatchewan Ashley Viklund said.

The event began on July 1 and runs until the ninth with every single match taking place at Mosaic.

“It’s awesome to play there. It’s beautiful and so historic. To have us girls be able to play on a field like that is a great opportunity,” Team Saskatchewan player Tilka Chapman said.

“It’s no surprise it’s happening in Saskatchewan. Football Sask has always been a huge supporter and cheerleader for women’s football,” Viklund said.

Team Saskatchewan is 2-0 so far at the tournament after defeating New Brunswick and Manitoba.

“I think our energy is up a lot. We know that we can do it and we feel better about the whole tournament in general (after those wins). I think it’s bringing us together quite a bit,” Chapman said.

The top two teams in the tournament will face off in the gold medal game at 7 p.m. on Saturday.

Author Salman Rushdie on ventilator after stabbing, may lose an eye

\Salman Rushdie remained hospitalized Saturday after suffering serious injuries in a stabbing attack, which was met with shock and outrage from much of the world, along with tributes and praise for the award-winning author who for more than 30 years has faced death threats for his novel 'The Satanic Verses.'

Ukraine's health minister has accused Russian authorities of committing a crime against humanity by blocking access to affordable medicines in areas its forces have occupied since invading the country 5 1/2 months ago.