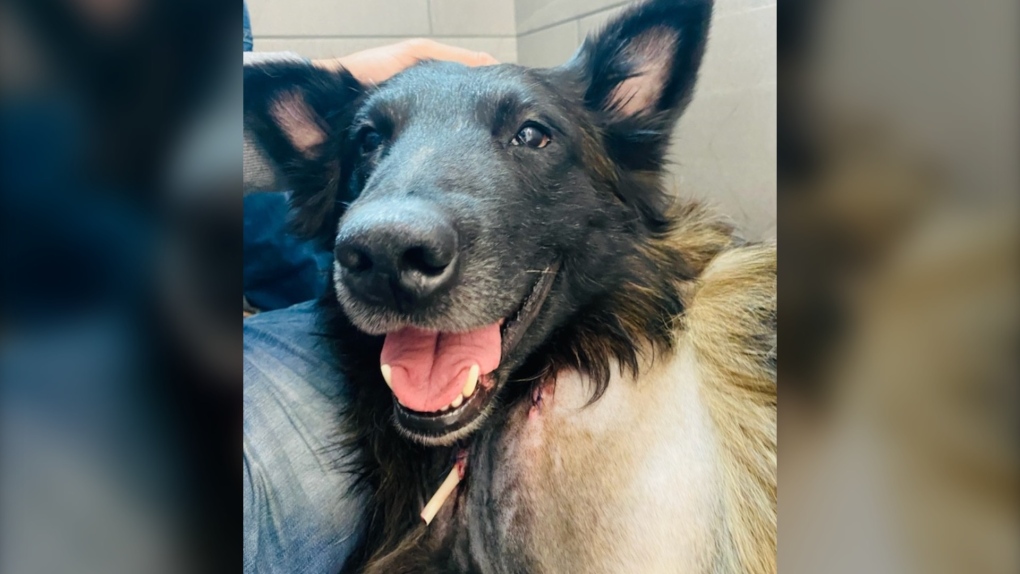 Police Service Dog Ralph was injured during an arrest on May 19, 2022. (Source: @reginapolice/Twitter)

A Regina police dog was seriously injured during an arrest of a man charged with sexual assault, on Thursday morning.

Police responded to the 600 block of Garnet Street on to arrest a 34-year-old man, alleged to have sexually assaulted a 24-year-old woman on May 9, according to a news release. Police said the suspect fled after he was seen leaving his residence.

The police dog was sent in pursuit of the suspect. RPS said he bit the suspect’s leg, but then broke away unexpectedly. Shortly after, the canine officer reported the dog was injured.

Ralph was taken to a veterinary clinic immediately for treatment, according to police.

“Our K9s give a lot in service to the humans of our community,” RPS said in a tweet.

Our K9s give a lot in service to the humans of our community. In making an arrest of a man accused of sexually assaulting a 24 year-old woman, PSD Ralph was seriously injured, but he will recover. #goodboihttps://t.co/QCOqIo1bvI pic.twitter.com/k9mrZ5vMyJ

The suspect is facing numerous charges including sexual assault, possession of a weapon for dangerous purpose and injuring a law enforcement animal.

He made his first appearance on these charges in Provincial Court on Friday.

Saanich police will hold another update on a deadly shooting that took place on Tuesday afternoon, leaving two suspects dead and six officers with gunshot wounds.

Here's what Air Canada and WestJet have said about reducing flights

Two of Canada's largest airlines announced steps this week to cope with delays, cancellations and service issues. Head to CTVNews.ca to read about the changes announced by Air Canada and WestJet.

Conservative leadership candidate Pierre Poilievre joined the final leg of a march led by a Canadian soldier charged for speaking out against COVID-19 vaccine requirements that has sparked promises -- and fears -- of a new wave of protests in the capital.

Ottawa protest organizer Tamara Lich will spend at least five more nights in custody in Ottawa after she was arrested in Alberta for allegedly breaching bail conditions.

The Conservative Party of Canada says approximately 675,000 members will be eligible to vote in this year's leadership race.

Omicron cousin BA.5 predicted to cause nearly 70 per cent of COVID-19 cases by Canada Day

Researchers examining the threat of emerging COVID-19 strains predict Omicron BA.5 will account for nearly 70 per cent of cases in much of the country by Canada Day.