REGINA -- The Regina Police Service saw a decrease in use of force incidents in 2019 compared to 2018.

That’s according to the service’s latest Board of Police Commissioner’s report that said in 2018, there were 303 reported incidents where force was used and in 2019, there were 276 incidents, a decrease of 8.91 per cent.

"I'm proud of the fact that is has gone down nearly nine per cent," said Regina Police Chief, Evan Bray.

"When we consider that we're seeing more guns, more weapons being used, people unpredictable and on drugs so the fact that we've been able to maintain a fairly consistent level of use of force and in fact go down this year is positive."

The Saskatchewan Police Commission requires all police services in the province to report all use for force incidents each year. 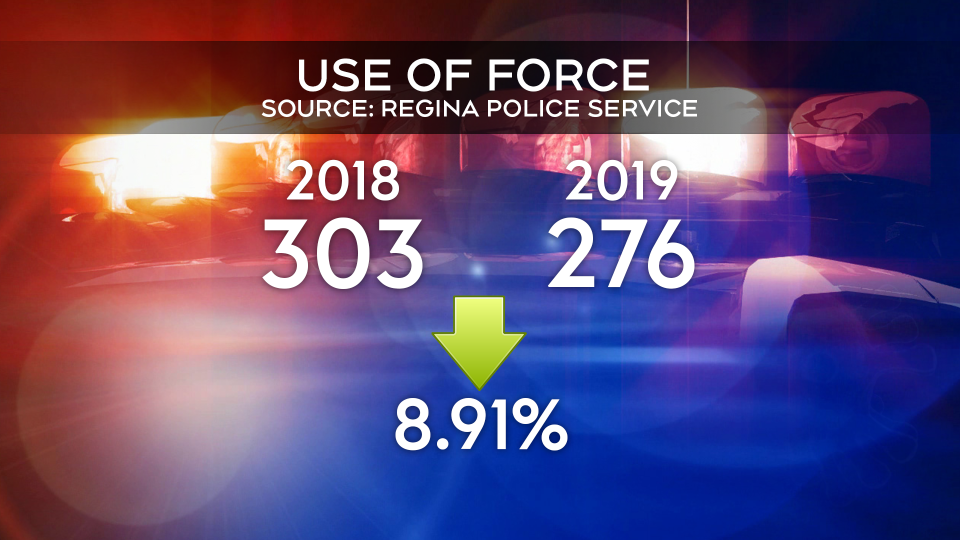 This information provides insight for where use for force was necessary.

“The variation in our uses of force appear to have a relationship to the changing nature of crime, drugs and firearms in the community,” the report said.

The most frequent uses of force in 2019:

The reported wanted be make clear that more than one use of force action might have been demonstrated during the same police incident.

“For example, a pursuit may involve a Tire Deflation Device, followed by the use of a CEW (Taser) and Takedown in arrest of the subjects. Therefore; one (1) event but three (3) uses of force,” the report said.

The report said this information is helpful to understand how use of force correlates with crime, drugs and firearms.

“The Regina Police Service will continue to evolve our processes and training with best practices and reflecting changes in laws and oversight,” the report said.

LETTER TO MINISTER OF JUSTICE

The Board of Police Commissioners unanimously voted to send the Minister of Justice a letter to reform the Public Complaints Commission to see civilian oversight into investigations where police incidents resulted in injuries of death.

The motion was put forward by Commissioner Jada Yee.

“Some residents in Regina, particular of black, indigenous and racialize people have expressed a lack of confidence in the current system dealing with complaints against police officers of police investigations,” Yee said.

“Whereas, residents of Regina have expressed a desire to ensure that civilian oversight take the place of police investigating police.”

The motion passed during Thursday’s Board of Police Commissioner’s meeting. The Board will now write a letter to the Minister of Justice requesting this reform.

The Chief of Police agrees with this motion.

“If the community had confidence in our police service and confidence in an oversight body to ensure that things are transparent in a proper way I think that’s nothing but positive,” Bray said.

The Ministry of Justice sent CTV News a statement about the motion.