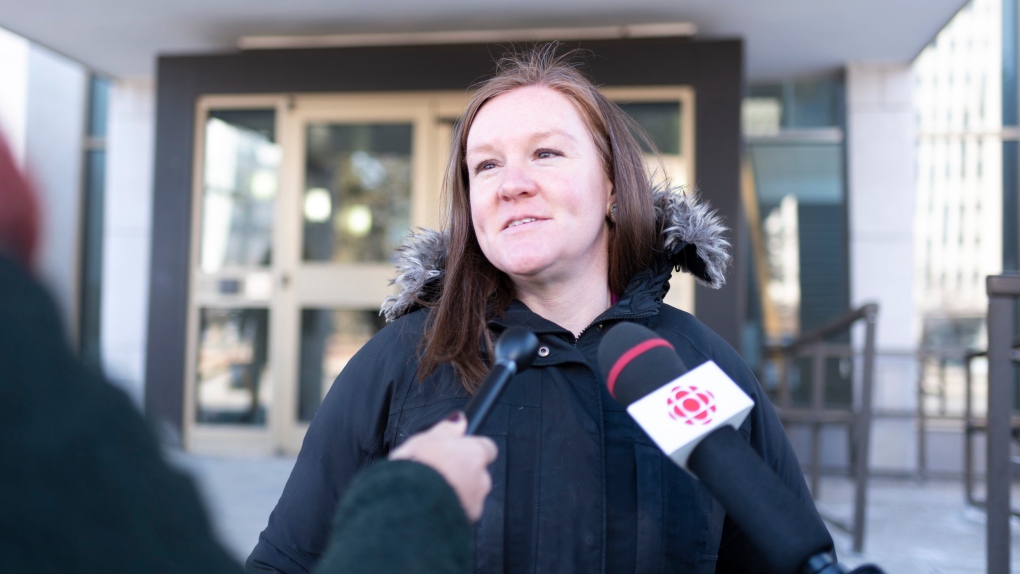 Emily Eaton, a professor in the department of geography and environmental science at the University of Regina, speaks to reporters at the Court of Queen's Bench in Regina on Wednesday Feb. 26, 2020.THE CANADIAN PRESS/Michael Bell

REGINA -- A professor taking the University of Regina to court to find out who's funding research into oil and gas as well as climate change says a dangerous precedent could be set if the information stays secret.

Emily Eaton, who teaches in the university's geography and environmental studies department, is researching the influence of the fossil fuel industry on education in Saskatchewan.

Under freedom-of-information legislation, she requested that the school disclose who is funding research related to oil and gas, coal, carbon capture and climate change, as well as which departments receive the money.

Eaton was denied her request and turned to the courts.

"Is it OK for private secretive research to be done in a public institution using public money?" she asked Wednesday after a judge reserved a decision in the case.

"Corporations have all sorts of places they can do their secret research in private research labs. The university is funded by the public and ought to maintain that position and role it has in a wider democracy."

The school maintains the decision to withhold the identities of funding agencies was made to protect researchers. It also said disclosure could reveal confidential and proprietary details of academic research.

Erin Kleisinger, a lawyer for the university, said academic freedom allows researchers autonomy to focus on topics of their choosing for whatever public or private entities they wish.

She argued that requiring the school to disclose names of funding agencies could expose professors to personal or professional backlash. It could also make those professors reluctant to take on certain research, she said.

"Professors would no longer have an environment to pursue innovative research, including for what may be considered to be controversial, unpopular or polarizing entities or causes without fear of disclosure and ensuring reprisals," Kleisinger said.

"If the university can't provide protection for researchers in respect of ... the source of their research funding and the identity of the entities for whom they perform research, that would erode their rights to academic freedom."

Dan LeBlanc, Eaton's lawyer, rejected the argument that harm would be done by revealing the information. He said access shouldn't be denied on that basis.

He urged the court to look at how freedom-of-information legislation is intended to further democracy and suggested that granting Eaton's request would meet that goal.

"The university is important to Saskatchewan," LeBlanc told court. "We citizens of Saskatchewan are presumptively entitled to know what goes on in this institution, which our tax dollars fund."

"Dr. Eaton cannot assess the (fossil fuel) industry's impact upon the university without this information, and neither can the rest of us."

In a statement, the university said it's willing to provide the titles of research projects and amount of funding received. It said it withholds information beyond that in all areas of research, not just oil and gas.

This report by The Canadian Press was first published on Feb. 26, 2020