The Regina Red Sox have released a concept plan for a 3,500-seat baseball stadium. The proposed location is the vacant railyards on Dewdney Avenue, just south of the Warehouse District and directly north of the downtown core. 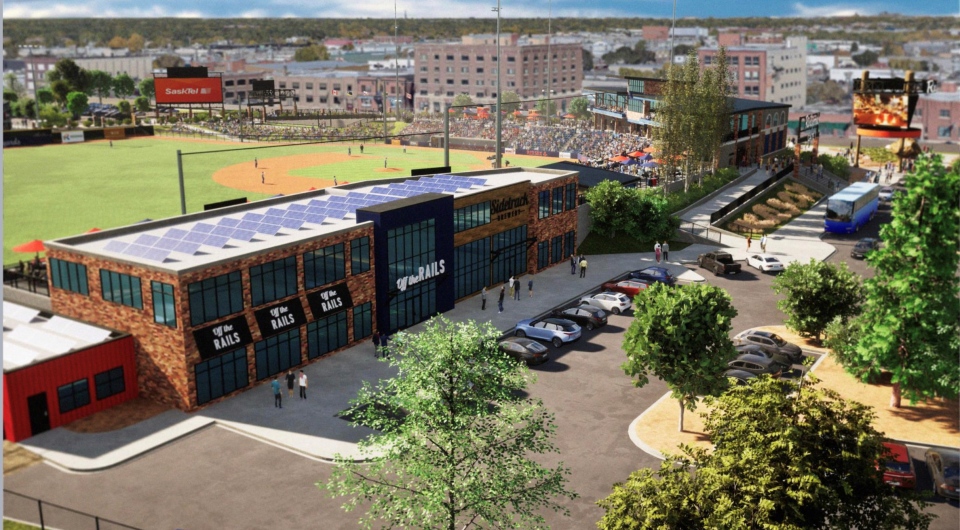 Bernie Eiswirth, the Regina Red Sox general manager, is hopeful about the proposal.

“We’re really excited about it, we love the location and we love what it’ll do for Regina,” Eiswirth said.

The Red Sox currently play roughly 32 games a season at Currie Field, a 60-year-old stadium at Mount Pleasant Sports Park in the north end of the city.

The facility only has one dressing room, meaning the visiting team has to change in the dugout. The bathrooms and concession are in need of upgrades and there are parking issues.

“Al [Simpson] calls it a dump, but it is not in great shape right now and it’s getting older every year,” Eiswirth explained.

The baseball team has partnered with Living Sky Sports and Entertainment (LSSE), which “will help facilitate the club’s financial participation with stadium construction costs.”

The group estimates they can build the stadium represented in the concept drawings for a cost ranging between $22-25 million. LSSE, together with the Red Sox, is willing to contribute between $4-5 million.

How the remaining funds are raised “still needs to be worked out,” according to Simpson.

“At the end of the day, this ballpark will be owned by the city. We’ve just come to the table to say, this isn’t just an idea, this is our vision. We’ve spent money on design plans. If you’d like to do a ballpark, let us know and we’ll work for you. At the end of the day, it’s a public workspace. How the city wants to finance the balance of it is really the city’s business,” said Simpson.

The stakeholders envision the City of Regina will own the ball-park.

“The province would be asked to contribute as well as the federal government, so I don’t know what those percentages would be, maybe 30 per cent each, but that’s to be determined,” Gary Brotzel, the president of the Regina Red Sox, said.

The City of Regina is already behind on paying off the price tag for Mosaic Stadium.

The Red Sox have cancelled back to back seasons due to the pandemic, but they still feel the timing of the proposal is ideal.

All six Saskatchewan teams that play in the 12-team WCBL have announced they’ll forgo this season.