Some Regina residents woke up to find their vehicles buried in snow from city plow following recent snowfall events.

Breanna Smith, a resident of the Uplands neighbourhood, said when she went out to start her car on Monday morning she couldn’t access it.

“The driver’s side of my car was absolutely piled with snow up to the hood, crammed into the wheel wells, the snow was up to the windows on my driver’s side and the front and back of my car so there was no way to get it out,” Smith said.

Her car was parked on the street overnight but was not in a designated snow route. She said she did not receive a notice from the city to remove vehicles for snow clearing. She said some neighbours along her street were in a similar position.

“This is my fifth winter parking on the street here and I’ve never had a problem,” Smith said. “Typically they will pile the snow on the other side of the street where the park is instead of up against everybody’s cars, so I didn’t think it would be any different this time.”

Smith said her car does have some damage as a result of the snow pile.

“The front driver’s side bumper, which is where a lot of the snow was actually packed under the car, is all cracked. I’ve noticed some scratches too but that’s pretty minor,” she said. 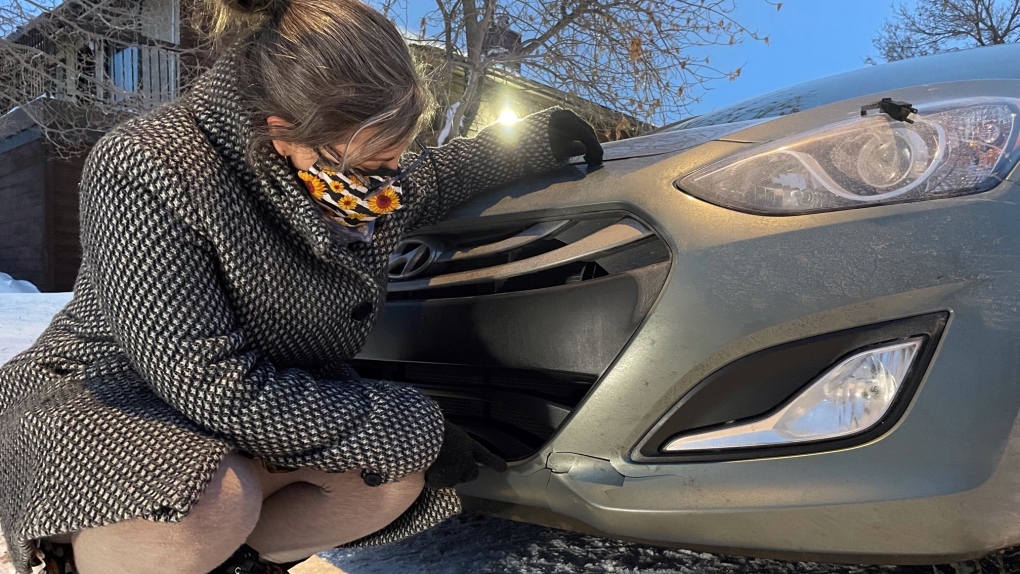 Breanna Smith points to a crack in her bumper that she says was a result of her car being buried in snow by a city plow. (Stefanie Davis/CTV News Regina)

Smith said she has filed a claim with SGI and the City of Regina.

Since posting photos of her vehicle on social media, she said a number of other residents have said they had similar experiences this week.

Some vehicles could be seen plowed in on Halifax Street and in the Greens on Gardiner neighbourhood.

“It’s concerning that this is happening to other people and that other people might have different circumstances and not be able to get to work or get to medical appointments or have the capacity to dig their car out,” Smith said. “It’s just frustrating.”

Tyler Bien, the manager of roadway seasonal operations with the City of Regina, said when the city has a snowfall coupled with high winds, plows have to tackle major drifting. He said that is often the case with neighbourhoods on the outskirts of the city, or streets near city parks.

“I know in this specific location, there was major drifting issues that night. However, further measures could have been taken to try to minimize the ridge around the cars there,” Bien said.

He said snow plow operators always try to minimize the impact on parked cars, but it is not their first priority.

“The primary focus of our operators is to keep the roads passable so traffic can flow and emergency vehicles can get through,” Bien said. “Secondary, they worry about the parked cars.”

Bien said once the complaint was made to the city about Smith’s specific neighbourhood, crews were sent to clean up the street. Smith said she noticed further clearing had been done.

If residents find their vehicles plowed in after a snow event, they can call Service Regina for a crew to be dispatched to help with clearing. Bien said they will come as quickly as possible while still addressing other snow issues around the city.