REGINA -- The Government of Saskatchewan has provided residents with a roadmap to reopening through vaccinations, but locked down restaurants and bars in Regina were hoping help would come a bit sooner.

"It’s extremely challenging right now," Grant Frew, bar manager at Bushwakker Brewpub, told CTV News on Wednesday. "We’re trying to hang on and I know there’s a lot of restaurants that are in worse positions than we are, we’ve got 30 years of experience in Regina and if we’re struggling, I just wonder what is happening for other restaurants."

The province tightened public health measures in the Regina area in late March, including prohibiting in-person dining at restaurants and bars, which remain open in all other regions.

Over the past week, case numbers and hospitalizations have stabilized in Regina and with that, Frew was hopeful that restaurants and bars would receive the green light to return to in-person dining by next week, when the current measures are set to expire.

During Tuesday’s COVID-19 update, Dr. Saqib Shahab said the province wasn’t considering changing restrictions before the end of May.

"Pubs and restaurants, in addition to having great food and great beer, it’s also about the ambiance and interacting with the server and the pub experience, takeout is just not working," Frew said.

"It seems very unfair that Regina restaurants are still locked down when our case numbers are going down and other cities and towns are allowed to still have in-house dining." 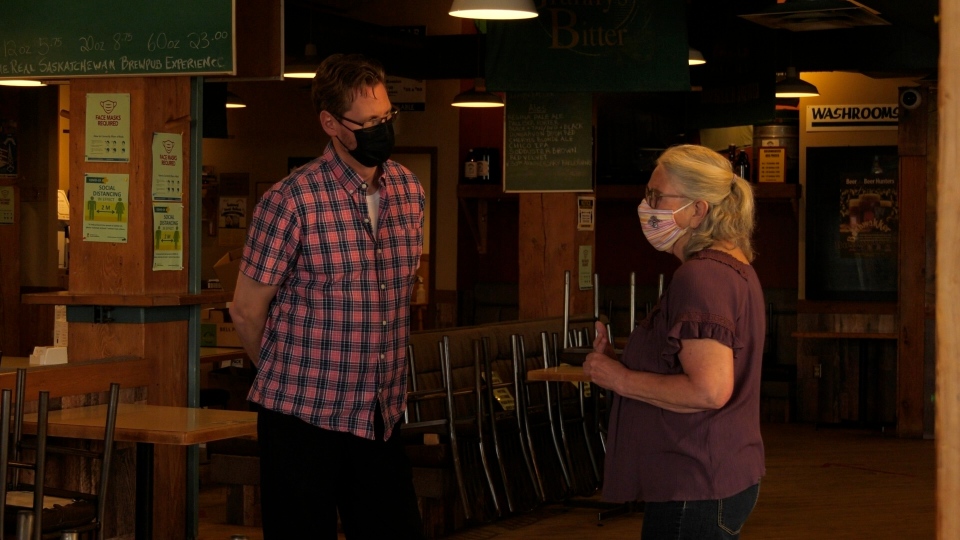 In last week’s Physicians Town Hall, the Saskatchewan Health Authority presented a slide showing that 66 per cent of COVID-19 cases in the province are coming from household contacts, while just six per cent are from social/entertainment and four percent from retail/other business.

Frew said Bushwakker operated safely when open and he’s confident they can continue to keep the public safe if allowed to reopen.

"We were down from about 50 tables to 19 with the three meters apart and all of the sanitizing protocols that we had in place, I heard time and again from our customers how safe they felt coming here," he said.

ROADMAP TO REOPENING PROVIDES LIGHT AT THE END OF TUNNEL

On Tuesday, the provincial government revealed its roadmap to reopening, which is targeting the end of May for the first loosening of restrictions – three weeks after it hits 70 per cent of residents 40-and-over with one dose of vaccine.

The three-step plan is based around vaccination rates with more restrictions being removed at each step.

"Trying to incentivize everyone to get vaccinated as a way to move forward towards having more personal freedom is something that we can all agree upon, regardless of where you are in terms of your person or political philosophies," Dr. Wong said.

"Go get vaccinated," she said. "That will be the determinant for reopening but also to reduce the strain on our health system."

To date, 66 per cent of residents 40-and-over have received their first dose and 45 per cent of all adults in the province have been given a shot.

Modelling from the federal government last month indicated provinces should wait until 75 per cent of adults have received one dose and 20 per cent have been fully vaccinated before removing restrictions.

Public health experts have also suggested that due to the increased transmissibility of the variants of concern, a higher target may be needed.

"Based on what we’re seeing out of the U.S., U.K., Israel and other places, the vaccine seems to be working really, really good," Dr. Wong said. "Obviously we want as much uptake as possible, but I don’t think the [70 per cent] number is dangerous or unreasonable."

Dr. Wong credits the province for the progress it has made so far on its vaccine rollout, but cautions that it may approach a wall soon as it work will need to be done to vaccinate people currently hesitant and those without the ability to go to a drive-thru or an appointment.

"It’s not a given by any means that we’re going to easily be able to get to 70 per cent and if we set the number higher than that, it just means that there is a more aspirational goal, but the government probably wants something that they think is reasonably achievable," Dr. Wong said.

Dr. Wong added he’s hopeful that Regina is through its surge in cases and Saskatoon seems to avoided the massive spike that the capital city saw, which could put Saskatchewan in a good position moving forward.

"Maybe an additional six to eight weeks of vaccine into arms across the rest of the province is helping to play a role… honestly I certainly hope that is the case because it would mean we’re not going to see the same surge that we’ve seen in Regina," he said.

Saskatchewan’s reopening plan is targeting the middle of July for a removal of most public health measures if 70 per cent of adults are vaccinated.

"I think it’s a little aggressive, but it’s nice to have some positive feelings in a time like this."