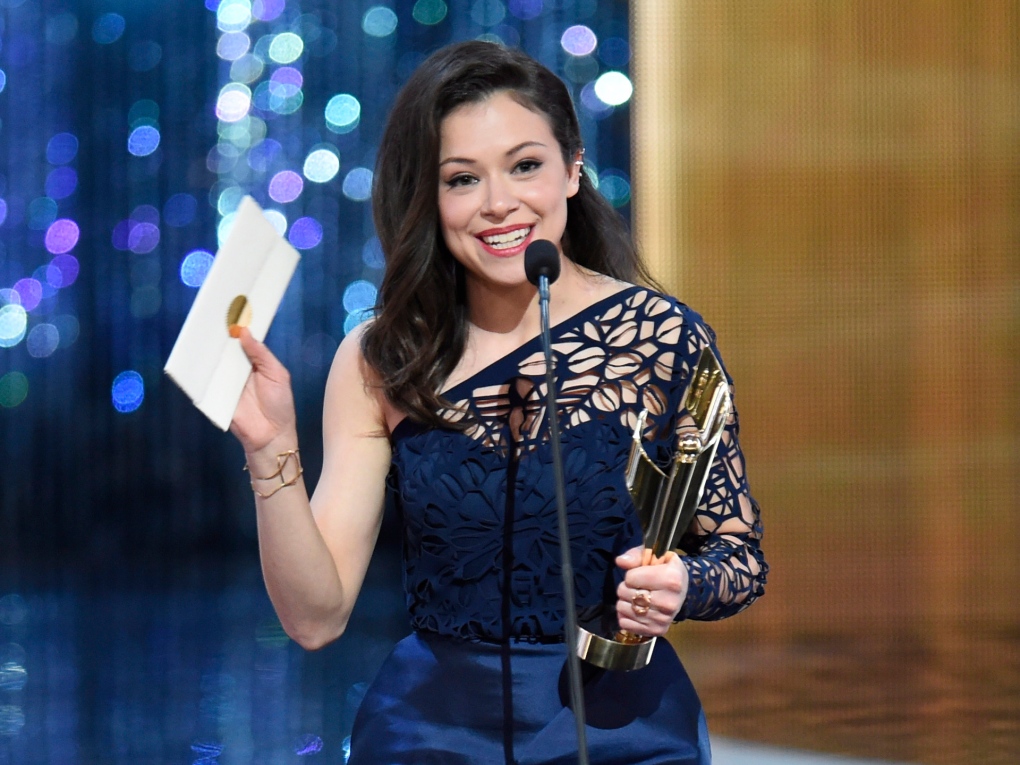 Tatiana Maslany holds her award for best actress in a drama at the Canadian Screen Awards in Toronto on Sunday evening, March 1, 2015. Maslany won for her role in "Orphan Black." THE CANADIAN PRESS/Frank Gunn

TORONTO -- The troubled characters in Xavier Dolan's forceful film "Mommy" had no trouble sweeping the Canadian Screen Awards on Sunday night, when the acclaimed feature racked up nine prizes including best picture.

Dolan's raw look at a widowed mother and her violent teenage son dominated the film categories, with the 25-year-old Quebec phenom taking best director, best editing and best original screenplay for himself.

The wins began before the glitzy CBC broadcast even hit the air, when an emotional Dolan was awarded the best editing and best original screenplay award in a non-televised pre-show.

"I'd love to thank my mother and dedicate this award to her, I truly mean it," said Dolan, whose searing debut, "I Killed My Mother" was also an intense mother-son saga.

"In spite of our differences she is the most absolute source of inspiration to me.... She is present in every word that I write, in every frame that I cut, in everything that I do and the person she is is the reason I'm here today."

During the broadcast, "Mommy" claimed all three of the acting prizes it had been up for, with best actor going to Antoine Olivier Pilon, best actress to Anne Dorval and best supporting actress to Suzanne Clement.

Meanwhile in the TV categories, the sci-fi clone saga "Orphan Black" loomed large, with wins for best drama and best TV drama actress for star Tatiana Maslany. That was on top of eight other awards it won at an earlier ceremony.

"It's such an honour to be here tonight," Maslany said as she claimed her trophy for deftly handling a slew of disparate, cloned characters.

"I'm so lucky to have this job, I feel so so lucky.... (Thank you to) all of the writers on our show and the cast and crew who are tireless and who fight for integrity and artistry at every level. Thank you, thank you, I could not do this without you."

The CBC broadcast was hosted by a jovial Andrea Martin who kicked off proceedings with jabs at Canadian politeness and frigid temperatures, and shoutouts to famous faces in the audience, including friend Eugene Levy and recent Oscar-winner Julianne Moore.

"Let's give out some awards before they turn this place into a condo!" Martin declared from the venue, downtown Toronto's glass-encased opera house.

In the end, the big wins were hardly surprises -- "Orphan Black" and "Mommy" led the nominees with 13 apiece and each had strong momentum behind them.

An emotional Dorval hugged Dolan before taking the stage to claim her best actress prize, when she paused repeatedly to collect her emotions.

"Mon dieu, ay yi yi, thank you," said Dorval, who switched between English and French as she read from a prepared speech.

"Thank you Xavier, mon ami.... Thank you for casting me in this role, thank you for talking about love with such heart and greatness and humanity as you did through this film."

U.S. star John Cusack won the best supporting actor prize for "Maps to the Stars," but was not on hand to accept.

Some Hollywood glitz came by way of Cusack's co-star Moore, who had been up against Dorval in the best actress category for her turn as an aging starlet in David Cronenberg's dark comic film.