Saskatchewan Roughrider fans are getting their first glimpse of what the new football stadium in Regina will look like.

Design details for the $278 million project were released during an announcement Thursday at Evraz Place.

Its standard seating capacity of 33,000 will be expandable to 40,000, with 68 per cent of those seats located in the sunken bowl.

The city says the flexible design of the facility will allow it to host various events year-round.

The venue is being described as "roof ready," meaning a full roof could be added at a later date.

The current stadium near downtown Regina originally started as a rugby field in 1910 and is known for its old wooden-bench seating and exposure to wind that will knock your socks off.

"Once we get into this stadium, people are going to say 'I love it,"' predicted Rider president and CEO Jim Hopson. "I love the fact that it is outdoors still, but we're getting some protection from the wind, from the driving rain and so on.

"Wind is a huge factor here in terms of comfort and the design reflects that."

Rider board chairman Roger Branvold agreed the $278-million stadium will make for a better game-day experience for fans.

Excavation work on the sunken bowl for the stadium is slated to begin at Evraz Place next month, with “substantial completion” expected in August 2016.

Mark Williams of HKS Sports and Entertainment, a U.S.-based architectural firm that designed the stadium, said it will be one of the jewels in his company's portfolio.

"We have opened the last three very successful stadiums in the NFL and I will put this design pound for pound with anything that we have done in the past," he said.

Regina Mayor Michael Fougere suggested the new stadium is just the beginning of a revitalized city.

"We are at the leading edge of growth, not just for Saskatchewan, but for the whole country," he said. "This is such a dynamic time to be in Regina. We're going to see so much more investment and job opportunities and things happening.

"This is a beginning of a new way of investment and development."

The current stadium will eventually be decommissioned and a 700-unit housing development built, the mayor said.

Also on Thursday, the Riders announced the new facility will carry on the Mosaic Stadium name, after the team extended its naming rights agreement with the company.

The Roughriders are set to play their first game in the new facility in June 2017. 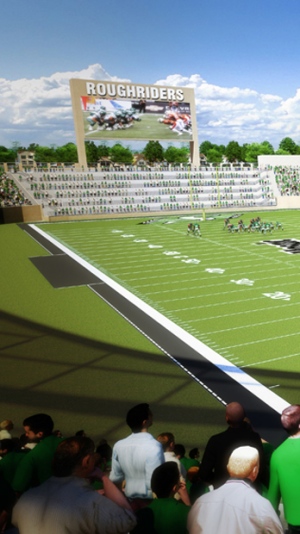