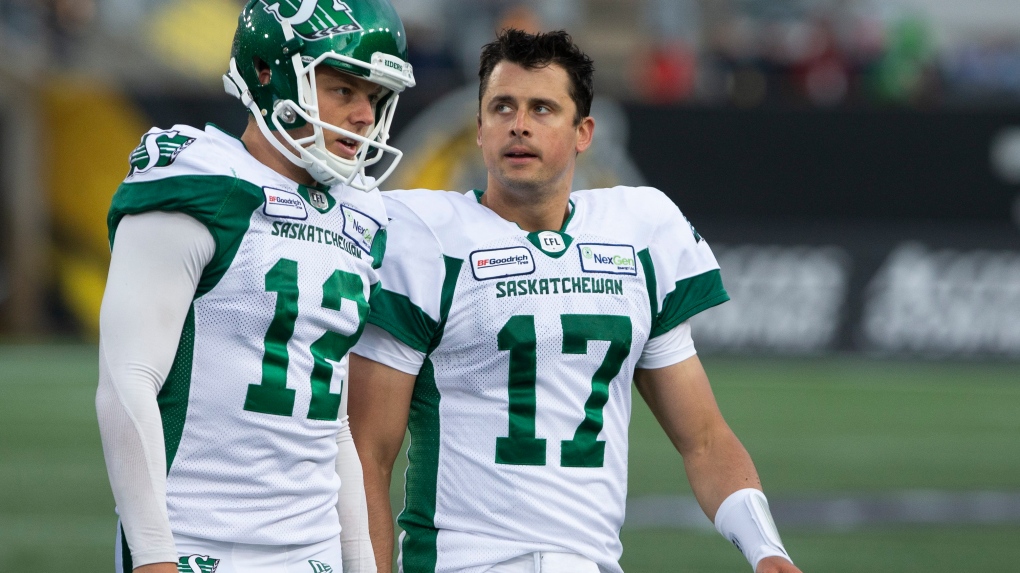 Saskatchewan Roughriders quarterback Zach Collaros looks toward Hamilton Tiger-Cats players as he leaves the field with an injury following a late hit during first half CFL football game action in Hamilton, Ont. on Thursday, June 13, 2019. THE CANADIAN PRESS/Peter Power

Williams' 68-yard punt return TD led Hamilton to a 23-17 win over the Saskatchewan Roughriders on Thursday night in the CFL regular-season opener for both teams.

Williams returned Jon Ryan's 52-yard punt for the touchdown at 8:48 of the third quarter to put the Ticats ahead 17-13. Saskatchewan pulled to within 20-16 in the fourth but two late interceptions ensured that Hamilton's Orlondo Steinauer emerged victorious in his CFL head-coaching debut.

"That was a heck of a return, he (Williams) got the whole stadium pumped up," said Hamilton quarterback Jeremiah Masoli. "We could've used anything but obviously whenever special teams score it's a huge deal."

Williams electrified an announced Tim Hortons Field gathering of 22,287. But the stadium wasn't even half-full as the game was played under a threat of rain in the first half and before the Toronto Raptors faced the Golden State Warriors in Oakland, Calif., with a chance to clinch their first-ever NBA title.

Steinauer said securing the win for the team's sake was much more important than for him personally.

"I learned a long time ago two points is two points," he said. "We have a lot to work on but any time you can coach off a win it's a big deal."

Saskatchewan lost for the first time in six games versus Hamilton as Craig Dickenson suffered the defeat in his CFL head-coaching debut. More importantly, though, the Riders played most of the game without starter Zach Collaros.

Collaros was facing the Ticats for the first time since being dealt to Saskatchewan in January, 2018. A scrambling Collaros left after being hit in the head by Ticats' linebacker Simoni Lawrence.

A repentant Lawrence said he didn't mean to hurt his former teammate. Collaros spent four seasons in Hamilton (2014-17) before heading to Saskatchewan.

"As a defensive player you play at a high level . . . it's hard to say, 'Go make a play and pull up if the guy slides at the last second.' In slow motion it might look like it's easy but when the bullets are flying it's tough. I'm apologetic and I'm going to try to do a better job to not do that."

Dickenson wouldn't comment on Lawrence's hit and said while Collaros appeared fine after the game, he certainly wasn't able to resume playing.

"I think he's going to be all right," Dickenson said. "We certainly didn't feel we could put him back in at that time, so we didn't.

"I was sorry to see him down because I really feel for the guy, but I can't comment on the hit because I didn't see it."

B.C. Lions receiver Duron Carter made it clear he didn't like the hit.

"If anyone touches @Rikester13 like that, I will be my last day I'm allowed in Canada," Carter tweeted, referring to Lions quarterback Mike Reilly.

A candid Collaros stated this week Thursday's game would be a significant one for him. The 30-year-old native of Steubenville, Ohio, also had approximately 45 friends and family at the contest, having been married this off-season and owning a home in Aurora, Ont.

"It's always tough to see other quarterbacks take a head shot (and) have a head injury," Masoli said. "Obviously that's one of my good friends and I hope he's doing all right."

Cody Fajardo replaced Collaros, who missed four regular-season games and the West Division semifinal last year with a concussion. But Fajardo limped off late in the third after being hit on an incompletion.

Rookie Isaac Harker took over on the Riders' next possession. He and Fajardo split snaps briefly before Harker finished under centre.

Powell gave Saskatchewan a 13-10 half-time lead with a one-yard run at 12:43 of the second. Powell, the CFL's second-leading rusher last year with Ottawa, had 104 yards rushing on 20 carries.

Masoli hit Banks on a 42-yard TD strike just 17 seconds into the second to put Hamilton ahead 10-7.

Hajrullahu's 48-yard field goal at 11:03 of the first to cut Saskatchewan's lead to 7-3. Fajardo opened the scoring at 3:08 on a two-yard run, capping an 81-yard, seven-play drive that was aided by the three Hamilton penalties.

"I just think we were tuned up too much," Steinauer said. "Everybody was trying to make a play.

"It was all great effort, just the execution was lacking. There were some not smart football penalties out there that kept drives alive."