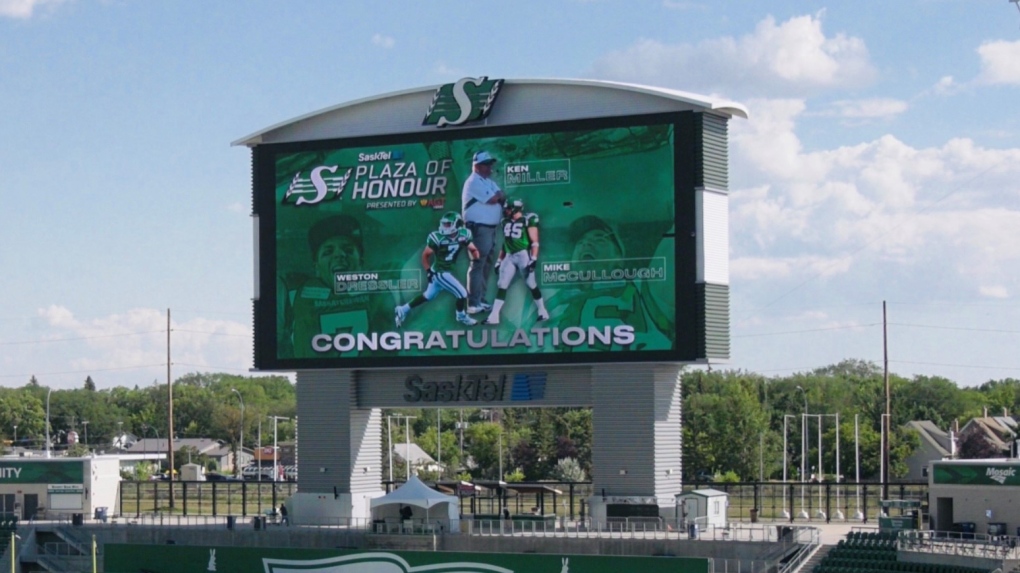 Three Grey Cup champions will be inducted into the Riders' Plaza of Honour at the Aug. 19 home game. (Brit Dort / CTV News)

Weston Dressler, Mike McCullough, and Ken Miller will be inducted into the 2022 Saskatchewan Roughriders’ Plaza of Honour during a halftime ceremony at the Aug. 19 home game.

“You kind of get to re-live the glory days. The fans here are something special and they bring a passion and excitement to every game,” said Dressler. “Tomorrow we’ll get to do that again. Even though we’re aren’t catching any passes, or scoring any touchdowns, or anything but to do that one more time will be a lot of fun.”

Dressler was a receiver with the Riders from 2008 to 2015 and played a total of 123 games with the Green and White.

He is third all-time in Riders receiving yards and receptions, and fifth in all-time touchdowns with 50.

A four time Western All-Star and three time CFL All-Star, Dressler helped the Riders to a Grey Cup in 2013.

“Especially the way we ended in 2013, it’s special, it always will be. I don’t think anything could ever replicate that. Hopefully we will this year and hopefully the guys will play at the home field and bring one home,” said McCullough. “I would just tell the players now to enjoy every moment, every game, because you never know when it’s going to be your last.”

Miller was an offensive coordinator, head coach, and Vice President of Football Operations between 2007-2011. He was named head coach of the Riders in 2008. He has 36 regular season wins and 3 post-season wins at the helm. Miller was a Grey Cup Champion in 2007.

“One of the greatest things about this franchise, about this province, is the fans. You know the CFL (Canadian Football League) is special for fans but the Rider fans, there are none like Rider fans. So it’ll be really special to be acknowledged by those people,” said Miller.

The Riders had Miller break out his coaching skills to talk with the team this week.

“One thing he talked about is ‘an attitude of gratitude’ and being thankful not only for who’s with you now, but for who has helped you along the way,” said head coach, Craig Dickenson. “He really helped me grow as a coach and a person when I started.”

“You could hear a pin drop, the guys were very interested in what he had to say. I really enjoyed watching Coach Miller in his element yesterday in front of a group of men just like he was back in 2000,” added Dickenson.

“I mean that’s your goal as a player when you’re done playing, you’re focused on that kind of stuff,” said quarterback Cody Fajardo on what it would be like to be inducted himself. “It’s an honour to be around these guys who have really set the building blocks for us and me as a player.”

Quebec's major party leaders made their final appeals to voters Sunday as residents across the province prepared to cast their ballots on Oct. 3. Polls are open from 9:30 a.m. to 8 p.m. Eastern time Monday. During that time, Quebecers will endorse or condemn their leaders' conduct during major language law overhauls, existential questions on provincial identity, and of course, the pandemic.

Brazil's top two presidential candidates will face each other in a runoff vote after neither got enough support to win outright Sunday in an election to decide if the country returns a leftist to the helm of the world's fourth-largest democracy or keeps the far-right incumbent in office.