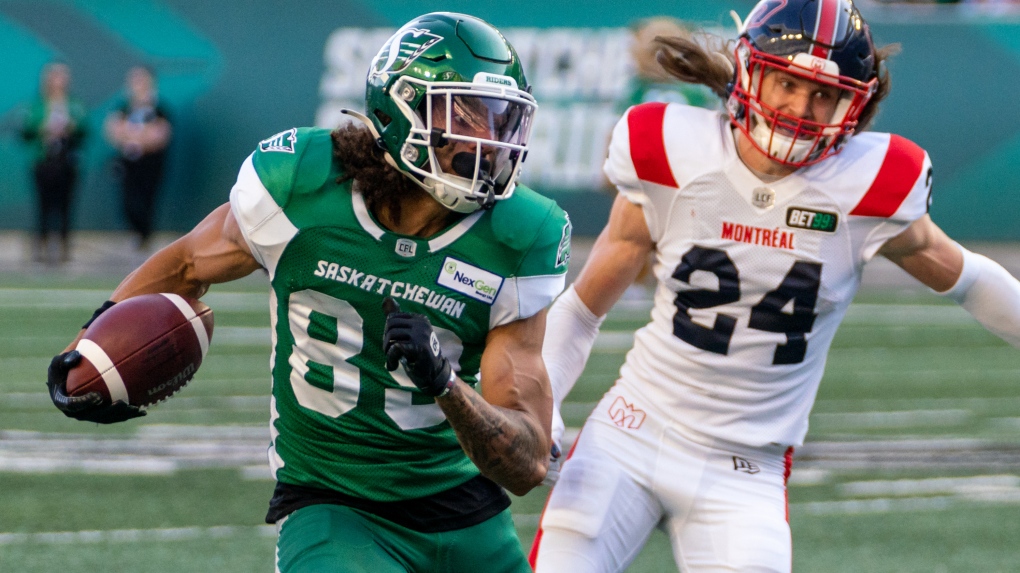 The Saskatchewan Roughriders offence caught fire in the third quarter and burned the Alouettes for 21 points in a 41-20 win over the Montreal Alouettes on Saturday night at Mosaic Stadium.

The Riders got touchdowns from Jamal Morrow, Cody Fajardo, and Kian Schaffer-Baker in the span of 7:58 in the third quarter en route to victory. Second-year running back Jamal Morrow eclipsed the 100-yard rushing plateau (103) for the second time in four games.

“Goes to show that when we get hot, we can be a really good team and all we’re trying to do is keep pace in the west.” Said Fajardo after the game.

“We just played better. Not perfect. I was really proud of them. They came out in the third quarter and played like we wanted to.” Head Coach Craig Dickenson added. “The second half, I challenged them to show me their character, win lose or draw, play as hard as you can and leave it all out there and they went out there and really did the job.”

“Coach put a big emphasis on rushing as one and I was just so happy to see everyone getting sacks, having fun and getting the win.” Lenier said after the game of his three sack performance.

Emerging star returner Chandler Worthy scored the Alouettes only touchdown of the half on an 84 yard kick return, as he wound and weaved his way though a field of green defenders. The score put the visitors up 10-7.

The Riders scored the game’s first touchdown when Cody Fajardo connected with Regina product Mitchell Picton on an eight yard strike. The play was set up by a 40 yard catch and run by Tevin Jones.

Picton and Jones were splitting time in place of injured receiver Shaq Evans. Jones caught all three targets on the afternoon for 56 yards, while Picton caught two of three intended balls for 14 yards and a major. Brett Lauther tied his career long with a 57 yard field goal late in the half. The Riders trailed Montreal 13-11 at half time.

The Riders had a couple of scary moments in the first quarter. Derrick Moncreif went down hard on a tackle and headed to the locker room holding his left arm.

He later returned to the game looking no worse for wear. Moncreif recorded a quarterback sack and an interception in the fourth quarter. Receiver Duke Williams, 29, was helped to the locker room in the second quarter after an attempted play on the ball in coverage.

The replay on TSN showed Williams’ head whipping hard against the turf. He, too, would return to the game after half-time. Williams had an uncharacteristic zero catches on five targets in the contest. “If you put on the tape, what he did for the receivers, blocking on the perimeter, that’s why he’s one of the top receivers in this league.” Said Fajardo of his star receiver.

The Roughriders defence did not allow a touchdown against in the contest until there was under ten minutes to go. Walter Fletcher cut through the line for Montreal’s first major, drawing them to within 12. The Alouettes comeback efforts were thwarted by Nick Marshall.

With Montreal on the move, Harris threw a ball toward Eugene Lewis, but Marshall jumped the route and had nothing in front of him as he dashed 90 yards to pay dirt. Marshall’s pick-six extended the Saskatchewan lead to 39-20. Fajardo connected with Morrow for the two point conversion to give the Riders a 21 point lead.

Cody Fajardo completed 18 of his 29 pass attempts for 224 yards and a pair of touchdowns. Jamal Morrow led the way rushing the ball for Saskatchewan with 103 yards on 16 carries. Kian Schaffer-Baker led all Saskatchewan receivers with 90 yards on seven catches and one touchdown.

It was a game filled with penalties. Saskatchewan took 16 flags for 155 yards. Montreal was called 12 times for 105 yards. Montreal defensive lineman Michael Wakefield, who was so explosive on the Alouettes 37-13 win over the Riders the previous week was ejected after receiving a second misconduct penalty.

The Saskatchewan Roughriders return to action on Friday, July 8th when they host the Ottawa RedBlacks. Kick off is scheduled for 7:30 p.m.

Canada’s deputy attorney general says the Department of Justice had ‘no involvement whatsoever’ in the department’s review and delivery of documents to ongoing independent public inquiry into the 2020 mass shooting in Nova Scotia.

B.C. man frustrated over wait after being approved for COVID-19 vaccine injury compensation

A B.C. man, who was among the first Canadians approved for Canada's Vaccine Injury Support Program, says he is frustrated with the length of time it is taking to receive compensation.

Canada's year-over-year inflation rate slowed to 7.6 per cent in July, with the deceleration largely driven by a decline in gas prices even as prices for food, rent and travel continued to rise.

OPINION | Economists are forecasting a recession in Canada, how should you prepare?

The next time the Bank of Canada raises interest rates on the scheduled date of September 7, 2022, it could potentially trigger a recession. Although there may be a chance that we don’t enter into a recession and the BoC is still hoping for a soft landing, it’s best to be prepared. Contributor Christopher Liew explains how.

Parents of young children will need a prescription for over-the-counter fever and pain medication due to a shortage in pharmacies, Toronto's Hospital for Sick Children is warning.

Two infant products, manufactured by baby gear company 4moms, are being recalled due to strangulation hazards, according to a consumer product notice issued by Health Canada.

Explosions and fires ripped through an ammunition depot in Russian-occupied Crimea on Tuesday in the second suspected Ukrainian attack on the peninsula in just over a week, forcing the evacuation of more than 3,000 people.

A mother from Florida shared an adorable video of her son's interaction with the family's dog.