Saskatchewan Roughriders (9-5) host the Calgary Stampeders (8-6), kicking off at 3:30 p.m. on Sunday at Mosaic Stadium in the CFL West Semi-Final.

Saskatchewan and Calgary collide on Sunday for a chance to meet the Winnipeg Blue Bombers in the CFL West Final.

This is the fourth meeting of the season between these two teams. Calgary won the regular season series two games to one but they’ve all been close battles. The Stamps beat the Riders 23-17 in week nine and 22-19 in week 10. Riders’ head coach Craig Dickenson finally got his first win against his brother Dave and the Stamps in week 12, edging Calgary 20-17.

“They do the little things right so when you play them they’re not going to beat themselves. That’s one thing to know going in,” Dickenson said earlier this week. “They’re going to force you to make plays so our guys know they have to play a good game in all three phases.”

"We're kind of in this underdog role even though we're at home... We want to go out there and show this league why we were a nine-win team." Cody Farjardo said Saturday.

“I can't stand Calgary or Winnipeg. I wouldn't want the playoff picture to be any other way,” the Riders’ defensive back said.

In their most recent contest on Oct. 23, Cody Fajardo was very efficient with the football, completing 21 of 26 passes for 222 yards and a pair of touchdowns. Bo Levi Mitchell was less accurate than Fajardo, but surpassed him in yardage. Mitchell completed 21 of 31 attempts for 311 yards and one major, but threw three interceptions.

The Riders have not won a home playoff game since the 2013 West Semi-Final when they beat the BC lions. They’re 1-2 at home since 2011.

“Coming into it healthy because I got that week off is definitely going to be an added benefit” Fajardo said. “Losing that game in 2019 was tough then not playing the entire 2020 season was hard, so I’m going to do everything I can do help this team win.”

Paul McRoberts Jr. draws into the Rider line-up at the slot back position with the loss of Ricardo Louis for the rest of the season with an Achilles injury.

“This is what I’ve been training for.” McRoberts Jr. said earlier this week about the opportunity.

Riders receiver Duke Williams is back, healthy and fired up for this game. He was asked about what the Stampeders defense does best.

“Drop back and play zone. They’re not going to play man to man because they can’t cover us man to man,” he said. “I respect them but we’re going to pick them apart.” 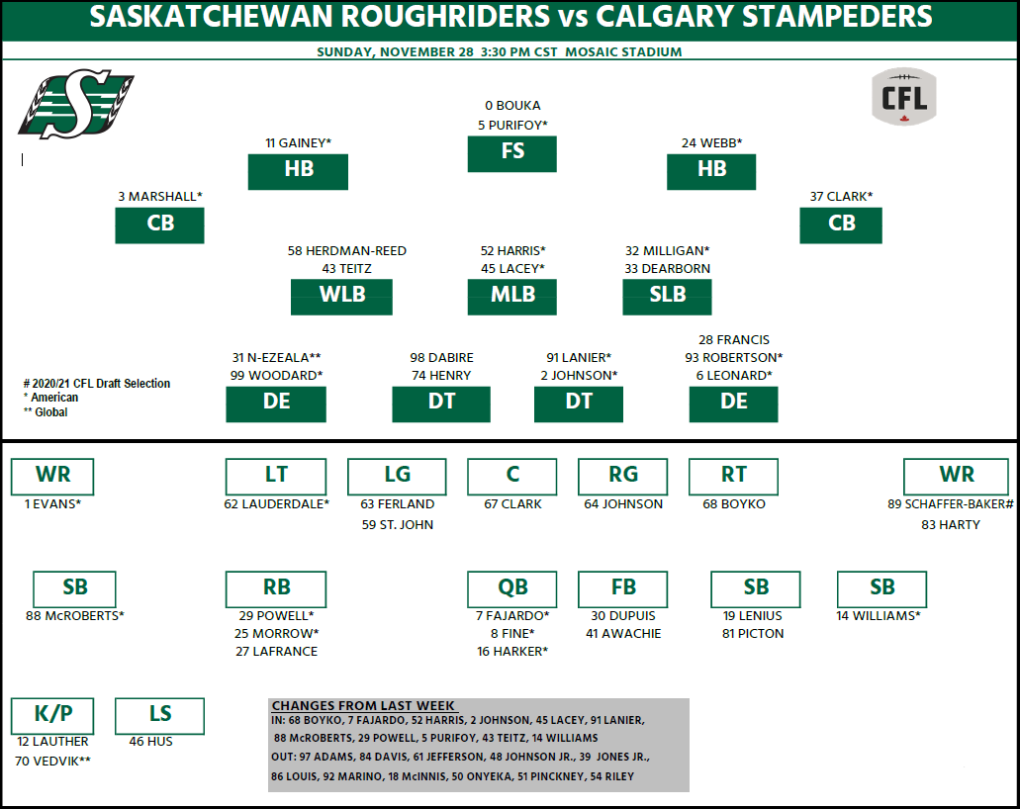 Mason Fine enters the game listed as the back-up quarterback, ahead of Isaac Harker, who has held the role all season. Fine completed five of nine pass attempts in the regular season finale against Hamilton for 64 yards. Harker went 16 for 23, 150 yards and two interceptions in the contest.

VIEW FROM THE OTHER SIDE

No glaring changes in the Stamps line-up. They enter the game mostly healthy according to their head coach and ready to go. 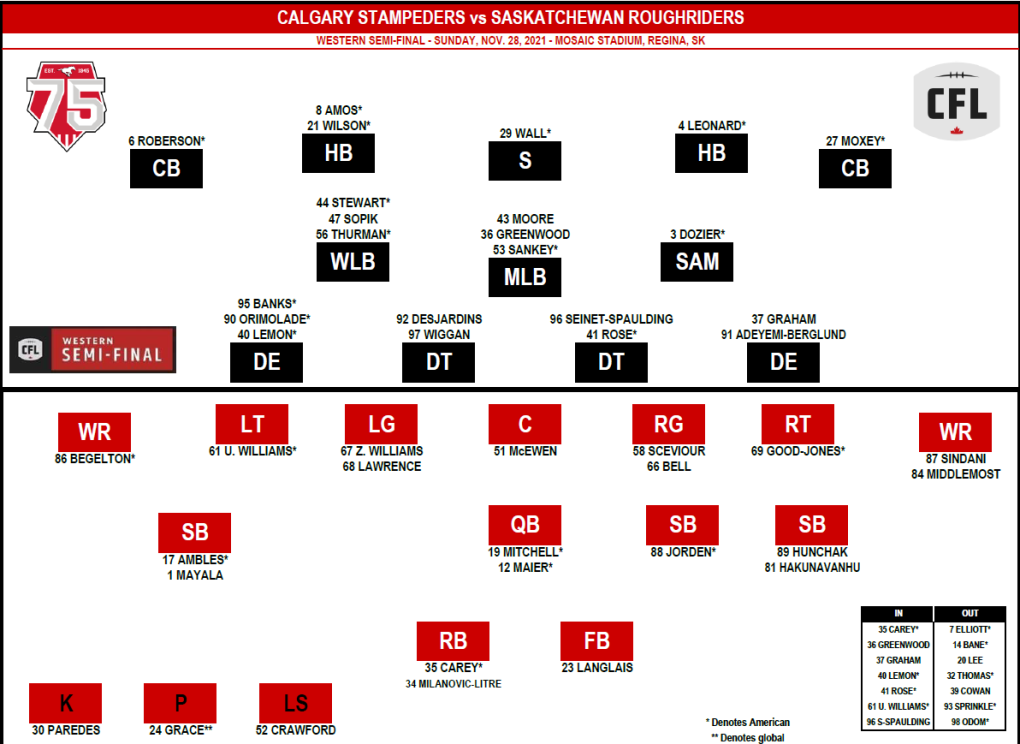 GET ME THAT STAT!

Six: The last four regular season meetings between the Riders and Stamps have all been decided by six points or less.

249: Stamps running back Kadeem Carey has slashed his way through the Riders for 249 yards on 46 carries this season. If the Riders want to win, they have to find a way to stop him.

Five: Mitchell has thrown 13 interceptions that have been returned for a touchdown. Saskatchewan has five of those.

You can expect about three degrees at kickoff with winds topping out around 27 kilometers per hour. Sun sets at 4:59 p.m. Dress accordingly.

Check out the CTV News Regina Riders’ Game Day Forecast for up to date weather information.