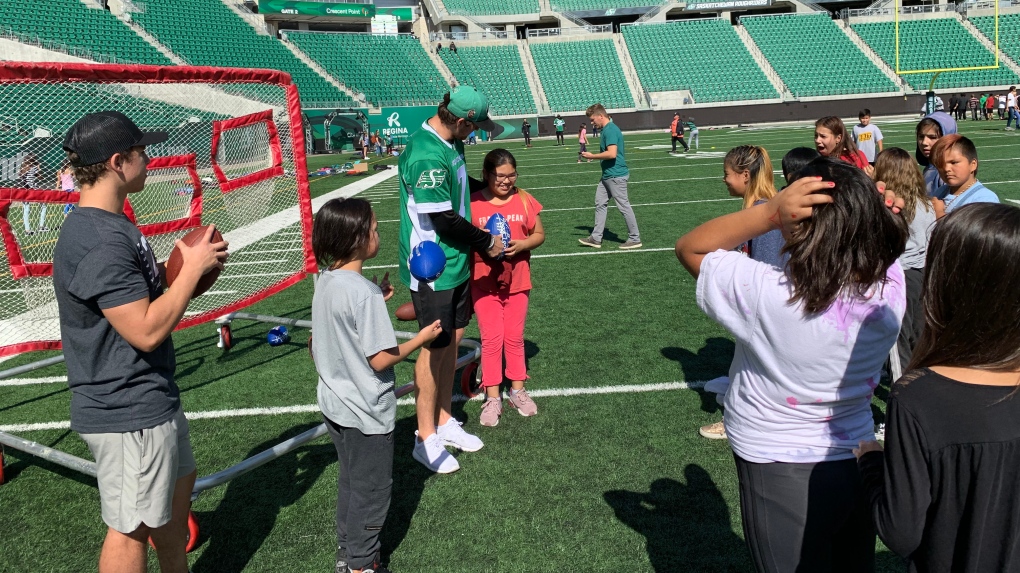 Cody Fajardo remembers getting to meet NFL quarterback Eli Manning when he was a young football player and the impact that had on him.

Fajardo was using that experience on Wednesday as the Saskatchewan Roughriders quarterback and his teammates hosted more than 400 elementary school students at Mosaic Stadium.

“I still have the jersey to this day of all those autographs, it was incredible and it’s something that I remember to this day,” Fajardo said. “I know a lot of these kids, they see us on TV or they see us in the games, but they never get to talk to us and so, that’s what I look forward to most is getting to interact with these guys.”

The platform football has gave me to share my experiences and faith with the youth is truly incredible. Some of my #SprinkleTeam enjoying themselves in mosaic today! #GoRiders #JesusWins pic.twitter.com/kpbb9IVL1K

This is the first year for the “Try Football” event with the Riders and Football Saskatchewan.

“Football is a beautiful game and for a lot of these kids, being so close to the stadium sometimes may not afford them the opportunity to be inside and to meet some of the players, so this is a great thing that the school division was able to afford these children and we’re happy to be a part of things,” said Mike Thomas, Director of Football Operations with Football Sask.

“This gives them exposure to the game, it gives them an opportunity to see what football is all about.”

“I wish I had something like this growing up, just coming from rough neighbourhoods and not being to have the support that we’re having here in this community, it’s great to give back,” Thigpen said.

“The coolest thing was I had a group of girls that came up to me and asked for a hug and that just melted my heart, I don’t know why they wanted a hug, but I was able to give it to them, so that was pretty cool.”

The Riders, who sit at 8-4 this season, are on their bye week. They return to the field next Saturday against the Argonauts in Toronto.