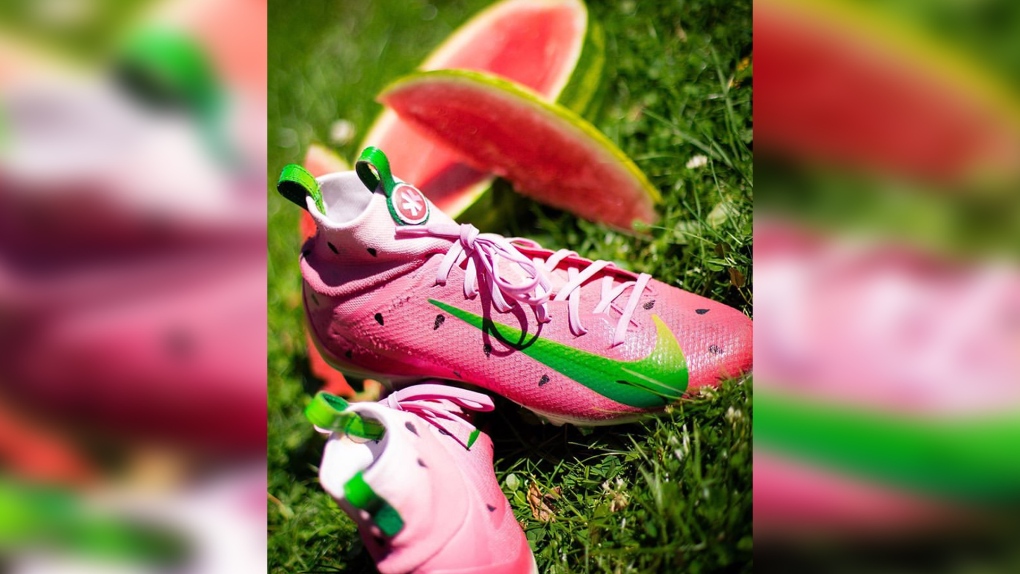 Riders wide receiver Kenny Stafford has been waiting to debut his watermelon-head inspired cleats for weeks, and he could get the chance in the Western Final. (Source: Kenny Stafford/Instagram)

His custom cleats are pink and green with black seeds on them, meant to look like watermelons.

Stafford says after doing some research about Rider fans, the watermelon was a part of the fandom that stuck out to him.

“The watermelon-heads were one of the most popular things and I was wondering why,” said Stafford. “I just looked up a brief history and realized fans just cut them out and just wear them as a helmet, so I decided I was going to do some cleats that way.”

The pink cleats doubled as a symbol for breast cancer awareness month in October, but Stafford was unable to show them off. The Saskatchewan receiving core has been relatively healthy through the back stretch of the season, which kept Stafford on the sidelines.

Although he has had a limited role with the Roughriders since being acquired in August, Stafford may get his shot to play in the team’s biggest game of the season, with starting wide out Shaq Evans hampered by injury ahead of the Western Final.

“I’m excited just to show Saskatchewan fans what they’re getting, just know that I can play football,” said Stafford. “To be in your colours, playing in front of the crowd, that atmosphere is unlike no other.“

The Roughriders take on the Winnipeg Blue Bombers in the Western Final at 3:30 p.m. on November 17 at Mosaic Stadium.